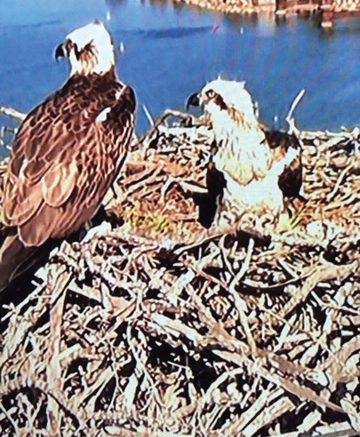 The Coast’s own osprey family is expanding

Residents have the chance to name three of the region’s newest babies, with Central Coast Stadium’s residential Eastern Osprey family expanding to five.

Central Coast Council posted a video of the three chicks nestled with their parents on its Facebook page earlier this week and is encouraging people to comment on the post with possible name suggestions.

Council has confirmed evidence of the family’s nest on top of one of the Central Coast Stadiums light poles through verified CCTV footage.

Stadium Manager, Kath Casey, said staff were thrilled to see the new chicks hatch, showing they have taken to their new home.

“They have really settled in now, and with their family growing, it is a real tick of approval for what we have done to help protect this threatened species,” Casey said.

“We love having them at the stadium and are thrilled to welcome these new additions to the osprey family.”

The nest has not been removed because Eastern Ospreys have been classified as an endangered species under the NSW Governments Saving our Species management program.

The program commenced July 1, 2016 and pledged $100M over a five-year period to protecting all the state’s threatened species.

The program lists the degradation of habitat for urban or tourism development as the critical threat to the birds, with less imminent threats such as climate change and disease also contributing to their decline.

Mayor Lisa Matthews said she was pleased to see that positive Council action had led to an increase in osprey numbers on the Central Coast.

“We are actively helping increase the numbers of a threatened species which is not only great news for the osprey but for biodiversity in our region,” Cr Matthews said.

“We know the challenges of urbanisation and development are placing on our natural environment, and this shows that we can be proactive and live side by side with our most precious of species.”