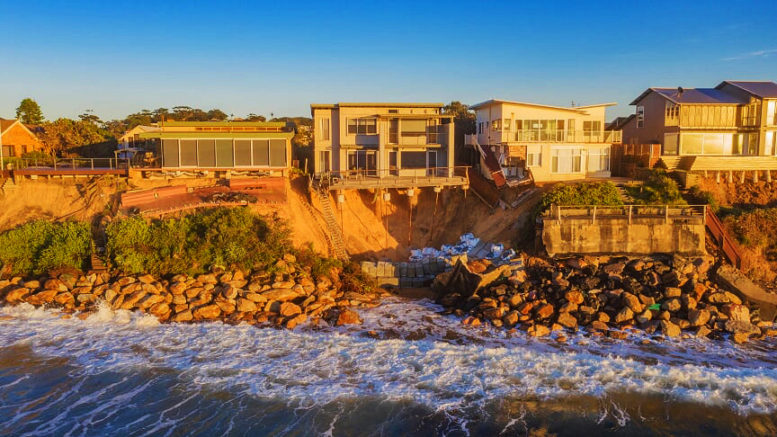 With work set to resume over the weekend on a temporary fix for severe erosion at Wamberal Beach brought on by wild weather and powerful tides two weeks ago, Central Coast Council CEO Gary Murphy said finding a permanent solution was “complex”.

A combination of an East Coast Low and swells of up to five metres saw homes undermined and residents evacuated as portions of the dunes were swept away.

Council and the State Government organised the placement of hundreds of huge bags of rocks on the sand to stave off further erosion, with work coming to a halt early this week pending the delivery of more rocks and bags from Japan, expected to arrive by the end of the week.

While the “rock wall” has been effective so far, Murphy said finalising a longer-term solution would take time.

“While a terminal protection wall is under investigation this solution requires input and agreement from a number of parties, including impacted residents, all levels of government and the community,” he said.

“An agreed funding model is a central element (and) can only be agreed to once a detailed design is developed.

“We are doing emergency works now, that have been directed by the Emergency Controller; some of the rocks, including the rock bags used in the current works, could be reused as part of a more permanent solution.”

Murphy said he could understand residents’ frustration over a situation which has been brewing for decades.

“A permanent solution has been worked on for some time now … but at the end of the day, it comes down to funding and who is going to pay for it,” he said.

“We are continuing to work closely with the State Government and I have been heartened by recent conversations with Parliamentary Secretary for the Central Coast and Member for Terrigal, Adam Crouch, that the Government is willing to work with Council on a permanent solution.

“If we look back at the history of this, going back from the 1950s, ‘60s and more recently, in the early 2000s, there were numerous approaches by the former Gosford Council to various state governments over the years for funding and they have been knocked back.”

Many residents have taken to social media citing incidences in the past where homes have been built or added to against Council advice and following Land and Environment Court rulings.

But resident Warren Hughes, who addressed councillors prior to their July 27 meeting, said residents had pleaded with Council for years to allow them to place suitably approved protections at the ocean toe of their properties at their own expense.

“In no way did we seek for these works to be paid for by the broader ratepayers,” Hughes said. Murphy said he could understand the broader community’s concern about Council funding a long-term solution.

“We also understand that this would be a significant impost on those affected,” he said. “So it is really heartening to hear Mr Crouch’s and the State Government’s approach this time around.”

In May this year, Council engaged Manly Hydraulics Laboratory to prepare concept plans for a terminal protection structure at Wamberal, part funded by Council and the NSW Government at a total cost of approximately $400,000. They are expected to be completed late this year.