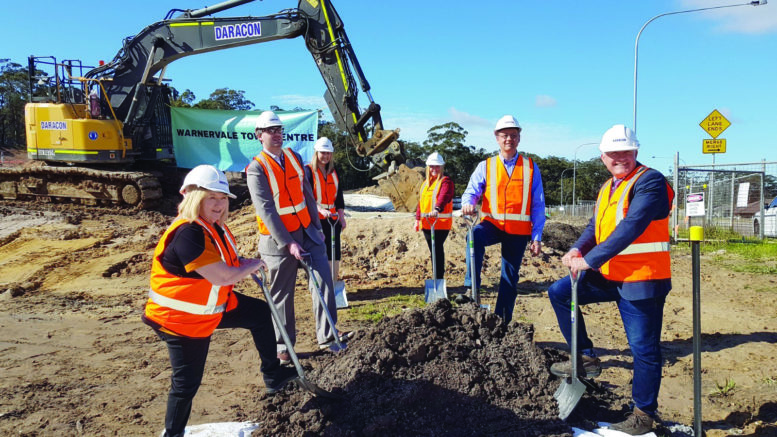 They are expected to be finished by October, ready for construction to start soon after on the retail and commercial facilities.

Also, Central Coast Council will deliver a water and sewerage upgrade in Warnervale Town Centre following the provision of an $8.5M funding package from the NSW Government.

Commencement of the civil works was marked by an official ground breaking ceremony on Monday, July 13.

The long awaited Warnervale Town Centre is the “heart” of the residential development, Hilltop Park, by private developers Landcorp NSW.

The Sparks Rd residential development and town centre is generating thousands of jobs during construction and into the future, hundreds of millions of dollars in investment and boosting economic confidence in the north of the Central Coast, says Shadow Minister for Central Coast and Wyong MP, David Harris.

Contracts have now been signed for an $8.5M upgrade of water supply infrastructure, announced on July 9 by Parliamentary Secretary for Central Coast, Adam Crouch.

“The new upgraded sewer mains and pumps in Warnervale Town Centre are critical to help develop it into a major residential hub,” Crouch said.

“We know that 92,250 extra people will call the Central
Coast home between 2016 and 2041, and enabling population growth to occur around Warnervale Town Centre is also a key part of this.”

Building of the town centre facilities is expected to start soon after civil works finish in October. The town centre will have a long day childcare centre, children’s play centre, a variety of retail shops, family tavern, medical facilities and pharmacy, and possibly an arts and theatre, as well as a Woolworths supermarket, opening up about 500 new ongoing jobs.

Also, there will be parklands, including a dedicated area honouring the history of the local indigenous community, an open-air sports facility, bike tracks, jogging/walking tracks and other community amenities within the parklands area, which Landcorp NSW is planning to finish by early 2022.

Colliers International Project Manager, Scott Kneller, said homes were starting to fill the 200 residential lots already completed in stages one to four and when the retail commercial area was finished, another five stages of housing blocks would be released. “

These kinds of projects are key, pivotal, in creating employment, particularly in this interesting environment with coronavirus, and then down the track, the development will create a community, a place to call home, with all the services in a convenient location,” he said.

Harris said there was still work to be done as Central Coast Council was working on remediation of the former tip which would become the parklands, as well as getting approvals for the next five stages of housing development.

It is understood that remediation work of the former tip was the subject of a confidential agenda item at Council’s July 13 meeting.

There is also the matter raised by Harris with State Planning Minister, Rob Stokes, who favoured fast-tracking a rezoning proposal by Woolworths to progress building development, which is awaiting an announcement of Council’s decision.

“Following completion of the adjoining park works, Landcorp NSW will, including the subdivision works proposed, expend about $25M in revenue directly to Council in the next 18 months alone, and some additional $70M in housing and associated construction, all of which is money straight into the Central Coast,” Harris said.

“That’s a huge win for Council, residents and ratepayers.” Federal Member for Dobell, Emma McBride, was pleased to see progress finally being made.

“We’ve got a bumpy road ahead of us as COVID-19 continues to unfold and local jobs have always been critical, and local jobs are now more important than ever, so to see investment in community that’s going to provide a lot of local jobs is something that everybody should welcome,” she said.

Mayor, Lisa Matthews, said the State Government funding boost for water and sewerage in Warnervale was another example of what could be achieved when all levels of government worked together.

“The funding boost will assist Council to deliver water and sewerage and help accelerated housing and commercial development in Warnervale, in line with the government’s plans for the region,” she said.

The $8.5M funding package is part of a total $21M commitment by the State Government to Central Coast water and sewerage projects, said Parliamentary Secretary for Central Coast, Adam Crouch.

A $12.5M package will go to Gosford infrastructure to enable future construction of 5,000 new residences in the city centre.

A third water infrastructure project is currently being finalised with Council.

Adam Crouch to oppose his own govt’s marine park proposal