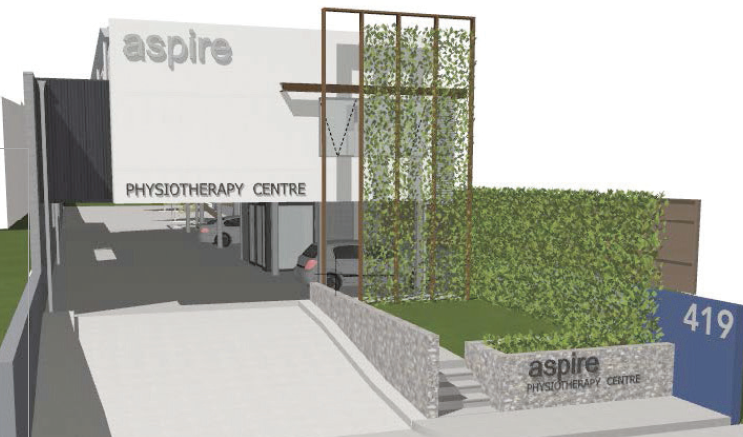 An artist’s impression of the new clinic

A $950,000 physiotherapy clinic at Erina has been approved by Central Coast Council, despite concerns raised by neighbours around traffic congestion loss of privacy overshadowing and asbestos removal.

To be located at 419 Terrigal Dr, the project will see an existing home demolished to make way for the clinic, which will comprise four consulting rooms, an office, amenities, a staff room, and a gym area.

An Environmental Impact Statement (EIS) lodged with the application says the building design will not result in any adverse environmental, amenity, social or economic impacts to the site and surrounding area.
“The proposal entails a health services facility that is commensurate with the locality and the land use zoning,” the EIS says.

“The use of the land would not adversely impact on the surrounding properties and would allow the existing environment to be adequately protected,

The use of the land for the erection of a Physiotherapy Clinic is considered to be an orderly and economic use of the subject land, whilst reflecting the character of the locality and the environment.”

The EIS says the proposal is consistent with the established mix of medium density residential development in the locality and would be in the public interest.

“The proposal would cater for the community needs for the local population within the Central Coast LGA,” it says.
Landscaping in keeping with the low-density residential zoning will be incorporated.

The EIS says the clinic has been designed to allow sufficient visual separation and screening from adjoining properties.
It will incorporate a mixture of external cladding with colorbond roofing utilising with finishes compatible with other premises in the area.

“The design incorporates a balance of horizontal and vertical elements to incorporated breaks in form that is encouraged by the design criteria of the Develoment Control Plan (DCP), it says.

The walls will be in light earthen tones and incorporate a break in form with the implementation of vertical elements complemented by a green climbing wall on the facade.

The EIS says the clinic is unlikely to generate offensive noise pollution requiring mitigation with a significant portion of car spaces provided underneath the building and entry and exit to the building also located underneath.

There will be four practitioners and two support staff with hours of operation Monday to Friday 8am- 7pm.

$2B Federal and state energy deal has a mixed response