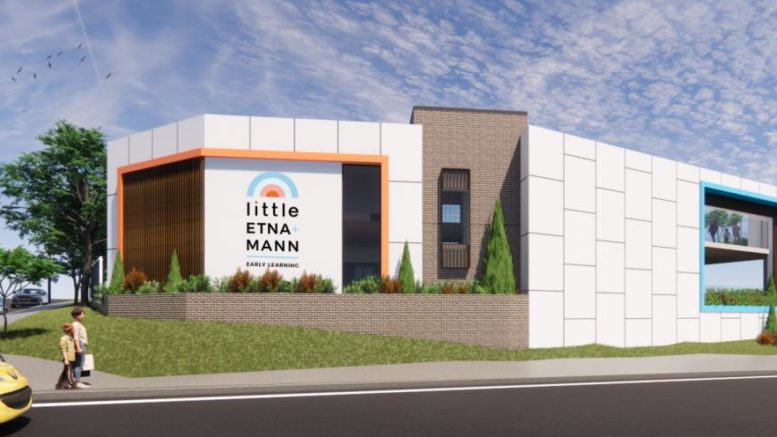 An artist’s impression of the proposed child care centre

A vacant car sales showroom on the corner of Mann and Etna Streets in Gosford will be transformed into a 90 place childcare centre if a development application now on public exhibition gets the green light.

A Statement of Environmental Effects lodged with the application says the proposal is intended as an interim use of the site, with a retail, commercial and shop top housing development eventually planned.

The initial proposal is for a childcare centre that would accommodate 90 children aged from 0-5 and 17 staff.

It involves the reuse of the existing showroom building on the site and a new building to be located along the Mann St frontage.

Part of the existing showroom and the adjoining garage structure will be demolished.

The showroom building will be repurposed to accommodate a reception/lobby area and two playrooms for 0-2 year olds and ancillary areas.

The new two-storey building will accommodate two playrooms on the ground floor for 2-3 and 3-5 year olds.

Both lift and stair access are proposed for the new building and landscaping is planned for both street frontages.

Fencing on the site will include a combination of transparent and non-transparent fencing to meet acoustic recommendations.

The proposed hours of operation of the centre are 7am-6pm Monday to Friday.

The proposal would see off street parking for 21 cars provided with access from Etna St via an existing driveway which will be narrowed.

Submissions on the proposal can be made until July 21.

The site will eventually be home to a $34M 21-storey mixed use development.

Warnervale District Contribution Plan to be on exhibition in October