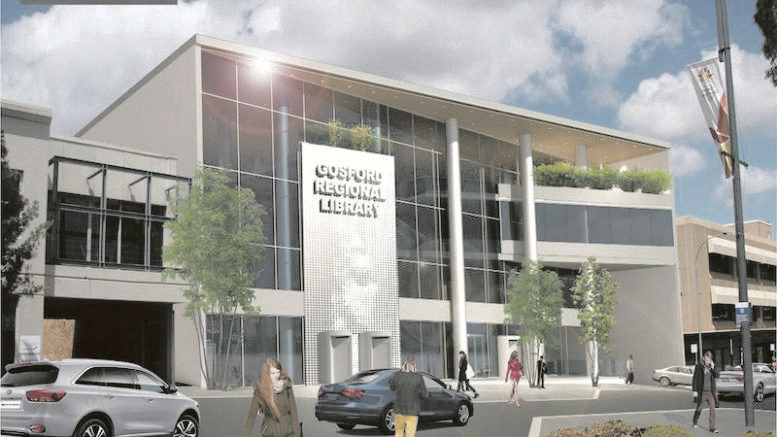 When Central Coast Council discussed the proposal for a new regional library proposed for Gosford CBD at its July 13 meeting, Cr Bruce McLachlan questioned whether the community really wanted a new $30M library.

He recalled fond memories of visiting the library with his father in the 1960s but after surveying a cohort of young uni students, wondered if they can’t now get all their research online.

Cr McLachlan asked if the Council was chasing an outdated idea and whether libraries were in fact still relevant.

Reporter Merilyn Vale asked the community whether libraries still have a role in the 21st century.

Derek Mahone lost his job at the start of COVID-19 closures.

Applying for Centrelink assistance and new jobs was made more difficult because he didn’t have access to library printing services as the libraries closed during that time.

“Something I find with people who work in offices, probably including councillors who have office staff, is that they don’t understand the importance of printing services provided at libraries,” he said.

“I am a life-long reader and have always been a member of a library somewhere since my Mum first enrolled me more than 50 years ago.

“I also travel frequently and move home a lot and I don’t like to own a lot of books so borrowing books for a short time suits me.

“Borrowing is more sustainable and environmentally friendly and it is silly to say libraries are out of date when they are now being started for things other than books like Toy Libraries and Tool Libraries and we are talking about the new sharing economy.”

Mother of two Deborah Moyr said libraries provide the best way of bringing the world of books to a child and there was no way a person could afford the range of books that her kids had devoured over the past eight years, thanks to libraries.

“We’ve lived on the Coast for four years and I sometimes feel like we’ve read every kids’ book there is in the library, but then we visit a different branch, or the library gets a stack of new ones in, or we move up an age bracket and wow, the options are huge once more,” she said.

“My kids are so excited about visiting the library and after an hour I am commonly needing to beckon them away with the lure of food or something, anything, to get them to extract themselves from the library without a tantrum!

“In particular, at the age when they are just starting to read, the library is an absolute necessity in my mind.

“The early readers are so short and they’ve completed them in 20 minutes and repeating them ends up with word memorisation rather than decoding, so access to a variety (like the 50+ in the libraries) is essential to ensure you find topics that interest and engage kids and allow them to continually challenge themselves with new words.”

She said the babies’ sing-along sessions, the toddler reading time, the Council school holiday program activities and the Lego sessions were all great.

“I remember through the HSC that I stayed at Erina library every Thursday night till close as it was open till about 7pm,” he said.

“It’s a shame though some libraries don’t do the same as my local one only stays open till 5pm.”

Fiona Beveridge said she was believed reading was great for mental health, coping with stress and lockdown, developing empathy.

“I love fiction, but I’ve also benefited from reading so many books about parenting and psychology and enjoyed watching lots of DVDs,” she said.

“Both my children love libraries and the 3-year-old and 1.5-year-old both love visiting the library and borrowing books, and it’s opened up huge worlds for the 3-year-old.”

She said to suggest that libraries are outdated was suggesting that books belong in a museum.

“The first years of a child’s life are critical to their wellbeing outcomes for the rest of their life.

“If the Council can support these early years through access to games, books, sing-along and reading sessions then they should.

“If, at the other end of the spectrum, the Council can support the elderly as they face social isolation and encourage physical movement – getting out of the house and going to the library might be the only physical movement for some people in a day – then they should.

Mair Preston praised the staff at Toukley Branch for delivering talking books for her husband.

It was fantastic service, she said.

“We have always had a very good relationship with Ladies at Toukley for 12 years since we moved to this area from Sydney.”

Robin Balcomb said she regularly uses the Bateau Bay Library and has been blown away with how helpful they have been during COVID times.

“My mother (86) was unable to visit her own library in Sydney and they didn’t home deliver, so I was able to get her a large range of audio books to make her isolation bearable… and they delivered to my door – an amazing community service,” she said.

“Libraries aren’t just about books, they are about community support.

“Many families don’t have access to computers or internet, so a library is the next stop.

“Many can’t afford to buy books or magazines, DVDs or music.

Craig Hillman said a differentiation must be made between questioning the need for a $30M regional library and the need for local libraries which are more accessible and service locally.

“Would the community be better served by an investment in local libraries?” he said.

“In earlier discussions Council suggested there would be a ‘reconciliation’ of services after the new library was built and this was assumed to refer to possibly closing smaller libraries.”

“A world class library is part of a necessary vision for Gosford,” he said.

“It does not discount the need for regional libraries either.

“We should embrace the future and be bold in our planning for it.”

Mary-Jayne House from Long Jetty said libraries are a community space – they are accessible, open, safe, welcoming places of learning and connection.

“We know that these things are vital for building healthy communities – they have a role to play in mental health, in visibility, in encouraging brains and bodies to stay active and healthy, and in providing a space open to all, not just for those able to play sport for example, as is the case with sporting grounds,” she said.

“The variety of events our local libraries run is wonderful – family history, study skills, advice and programs for babies right through to seniors, in addition to the opportunity to borrow books, DVDs, magazines, audio books and more.

“They offer internet access, advice from staff about how to research and find information, and an open space where you can go without having to spend money.”

She said she would love to see a landmark library on the Central Coast.

“If we look at something like the new Inner West library (which has also just won an architectural award), this is now a major centre for events, conferences, facilities, and functions.

“It is an absolute failure of the imagination to consider libraries as ‘outdated’ and also very narrow to not understand that lots of people engage with these places and would visit a drawcard facility.”

In his defence, Cr McLachlan said he was a long-time library supporter.

“My father was an avid reader and we made a weekly mid-week outing to the local Long Jetty Library, now the RSL museum, to return our books, or get late fees,” he said.

“It was an enjoyable experience with my father as a youngster, but that was in the 1960s.

“I really question is that activity relevant for families today, and I question the $30M outlay for a Regional Library.

“Are people really going to travel from Toukley or Wagstaff to visit the Regional Library?

“I actually surveyed that question to young uni students, and the overwhelming answer was no.

“They can get all their research online.

“And are we then going to rationalise and close the local ones, that our elderly can access, which would be a perfectly economically, rational financial decision.

“If you recall in debate I said to staff why not just come out and be honest, say you want to build a new Council chamber for staff, that includes a library, which is more the reality of the changed plans that were thrust at councillors with little background information.”