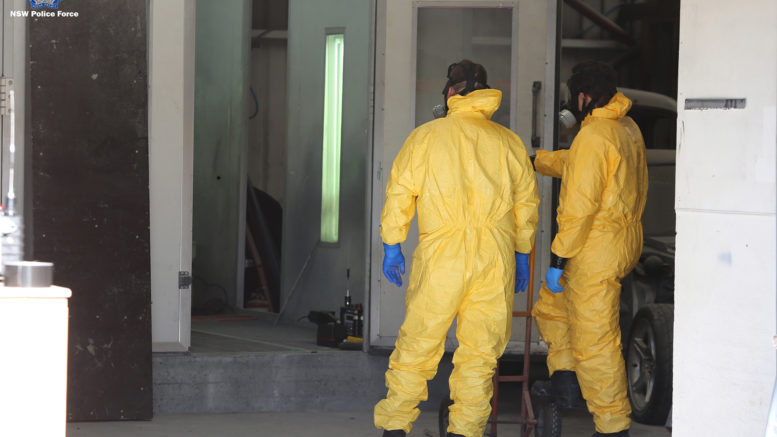 Two men are before the courts and an ice laboratory has been dismantled following a multiagency police operation at Tuggerah over the July 11 and 12 weekend, as part of an ongoing investigation into the importation and manufacture of prohibited drugs.

Following extensive inquiries, two men, aged 47 and 36, were arrested outside a business on Ace Cres, Tuggerah, at around 5:45pm on Saturday, July 11.

A subsequent search warrant was executed at the business, where police uncovered a clandestine laboratory, containing equipment and substances consistent with the manufacture of crystal methylamphetamine (ice).

All items were seized by the Chemical Operations Team for forensic examination.

The pair were taken to Wyong Police Station and charged with manufacture  and supply prohibited drug in a large commercial quantity.

Commander of the Organised Crime Squad, Detective Superintendent Martin Fileman, said the arrests of these men were significant.

“Police will allege in court that the pair were members of a criminal syndicate manufacturing and supplying the drug ice,” Det Supt Fileman said.

“The substances seized on Saturday in Tuggerah had the potential to manufacture a large commercial quantity of ice with an estimated street value of $2.4M.

“As the importing of illicit substances has become more challenging for Organised Crime, many groups are turning to manufacturing their own supply to keep up with market demand.

“But while they are adjusting the way that they do business, NSW Police and our partner agencies such as the NSWCC, will remain just as dogged in our shutting down their operations and putting those responsible before the courts,” he added.

The men were refused bail and appeared at Newcastle Local Court on Sunday, July 12, where they were formally bail refused to appear at Wyong Local Court.