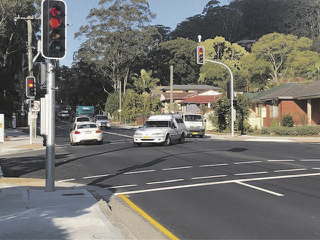 Koolewong and Point Clare-Tascott Progress Association has welcomed new traffic lights at a problem intersection at Point Clare, after setting the ball in motion two years ago.

Secretary, Helen Orchard, said the association had written to the State Government in 2018, highlighting the difficulties of the intersection, at Brisbane Water Dr, Jirrah Ave and Koolinda Ave, and asking for action.

“The intersection is used by the many families and organisations attending sporting events at Fagan Park and those attending the Boy Scout and Girl Guide halls, as well as the users of the picnic facilities and walking and cycle tracks,” the association said in its letter.

Nearby residents and staff, visitors and residents of the Orana BapristCare Aged Care facility also use the intersection on a regular basis.

Orchard said the association had presented a petition containing around 200 signatures collected by member Jenny Carney, with support from sporting organisations, as well as the Boy Scouts and Girl Guides.

“We are really pleased that the work we requested has been completed within a two-year time frame,” Orchard said.

“We would also like to thank RMS Project Officer Peter Talbot for his diligence in seeing the work through.”

“This intersection upgrade is part of a $5.3M project to deliver safer and more efficient trips for motorists,” Crouch said.

“The road has been widened to two lanes in each direction and a new eastbound bus bay has been installed next to Fagan Park.

“The work also allows pedestrians to enjoy improved safety by crossing at the new traffic lights rather than the mid-block pedestrian crossing further west which has now been removed.

“This is all about improving road safety for motorists and pedestrians, which I know will make a real difference to residents in Point Clare and surrounding suburbs.”

A small number of trees on the edge of Fagan Park and others next to the intersection have also been removed.