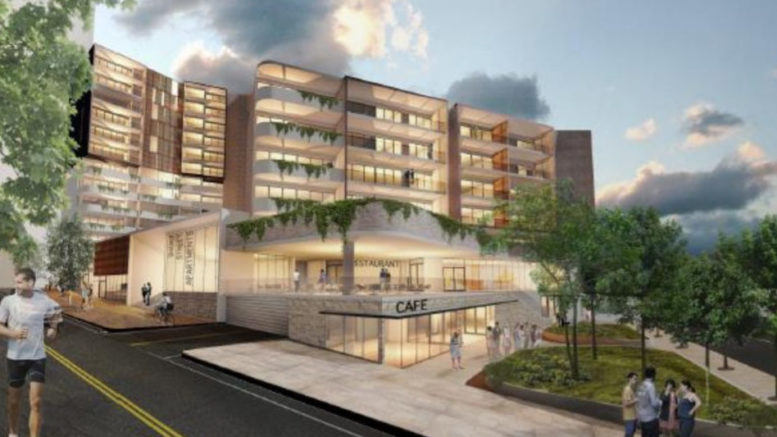 An old concept plan first put forward by the former Wyong Council for developing a significant block of land at The Entrance has again been criticised by the Hunter Central Coast Joint Regional Planning Panel (JRPP) for its lack of detail and lack of masterplan understanding.

The site takes in the car park bound by 10 Dening St, 1-5 Short St, Theatre Lane and Bayview Ave, The Entrance.

The vision includes two towers of about 80 units, shops and parking as well as civic open spaces.

JRPP chair Alison McCabe suggested that the applicant be pointed to examples of masterplan applications in other Local Government Areas to enhance their understanding and requested that assessment staff ensured that all remaining matters were outlined in writing to the applicant.

The chair noted that as a Council site, the development should provide a benchmark of suitable development.

The council has been given until June 24 to submit additional information or amended plans.

The former Wyong Council first put forward a masterplan for the land in 2014 and it was approved by the JRPP in 2015.

A subsequent plan was then submitted and knocked back by the JRPP in May 2018.

The latest proposal was submitted in December 2018 by Cardno on behalf of “Wyong Council” – after the council amalgamated with Gosford to form Central Coast Council.

It includes street front podium elements limited to two storeys at the boundaries with two residential towers – one with 12 storeys over one level of retail and one with eight storeys over two levels of retail.

Below ground carparking consisting of 3.5 levels are proposed with loading facilities off Theatre Lane.

The application says the proposed development includes significant public domain improvements including a Piazza at the Dening Street frontage and a Bus Hub on The Entrance Road.

“The Piazza is a significant public space and a fundamental building block for the Town Square envisaged in Council’s adopted Masterplan,” the application says.

The JRPP met in May twice, including with council staff and an external independent planner engaged by Council to assess the application.

The panel resolved to give the applicant one final opportunity to address issues with the DA.

The panel said that factoring in re-notification/re-advertising, internal and external referrals and internal reporting timeframes, it anticipated that a report was likely to be forwarded to the JRPP for determination in September or October.

The remaining issues and concerns relating to the proposal were discussed at the last meeting including the adequacy of details provided to undertake the assessment and staged development approach and the lack of detail of the overall concept including setbacks and floorplates, and public domain improvements.

A tentative panel meeting date of August was penciled in for status update following the re-advertising of amended plans.