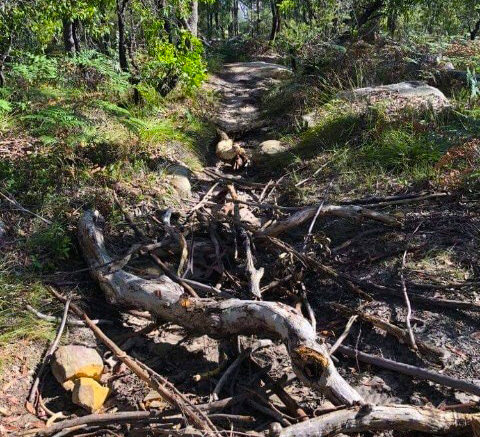 Members of the Central Coast mountain biking community have hit back at calls to have mountain biking disallowed in COSS lands and say they have just as much right to be there as everyone else.

Many photos have been circulated on social media, like this one taken at Kincumber Mountain, showing how some people have taken to booby-trapping trails with logs, rocks and sharpened sticks.

“(Traps) are something that we deal with – there’s not a lot of evidence as most riders that come across a trap usually remove it from the trail straight away to ensure no one else gets hurt,” Arnebark explained.

“The big issue with traps is the placement.

“If it’s around a blind corner for instance there’s real potential to cause serious injury and over the years we have had people get hurt and equipment damaged,” he said.

Other instances include fishing line strung across trails and of cork and nail spikes being scattered on a trail at nearby Bolton Point in the Lake Macquarie State Conservation Area in January.

According to Arnebark, mountain biking trails in the LGA are mostly pre-existing fire trails located within natural reserves and fail to meet the needs of mountain bikers.

“Mountain biking is an approved activity under the COSS Land Strategy, but the problem is Central Coast Council doesn’t have one metre of dedicated mountain biking trails for local riders to use.

“The current fire trails are insufficient to meet our needs in accessibility, technical diversity and length,” Arnebark said.

“The fact is we really don’t have anywhere to ride on the southern end of the Coast and that’s why these unsanctioned trails are being built.

“We realise some of these builds can disturb the natural environment and that’s why the mountain biking community wants to work with council to see a professionally built and sustainable trail network established,” he added.

The study was launched in 2019 and is currently undergoing review with a final report expected to be made available to the public before the end of the year.

Arnebark hopes the study will recognise Kincumber Mountain as the most suitable reserve to form the mountain biking hub for the southern end of the Central Coast.

“Mountain bikers want council to recognise that we have the same rights as anybody else when it comes to accessing COSS land trails.

“We want to see a master plan for new trails that acknowledges the widespread, intergenerational appeal of mountain biking.

The Community Environment Network (CEN) however, is one group that has been vocal in its criticism of mountain biking in COSS lands.

John Asquith is its Vice President and he believes mountain bikers should not engage in blame shifting when it comes to the damage they’ve wrought.

“It is unquestionable that these unsanctioned biking trails are causing damage to our COSS land and I think it’s extremely important for the mountain biking community’s own credibility that they get the individuals responsible under control,” Asquith said.

“Mountain bikers need to address the issue of stopping this environmental damage up front, not base it on a promise that relies on them getting what they want,”

“I can appreciate that their numbers have grown and that they want more adventure, but the CEN did not spend decades fighting to get these reserves protected so mountain bikers can jump over some rocks.”