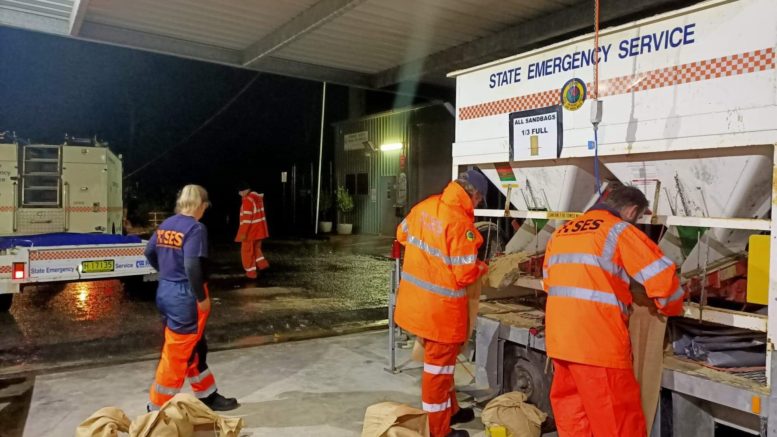 The SES conducted a sand bag operation at Davistown on Monday

Gale warnings were issued by the Bureau of Meteorology on May 25 for coastal waters on the Central Coast as weather conditions over the weekend continued to deteriorate.

During the day on Sunday, BoM recorded average wind speeds of 60kmh to 85kmh with a peak gust of 109kmh at 4.36pm.

NSW SES Gosford Unit Deputy Commander, Werner Klumpp, said crews had been put on standby on May 22 but callouts were fewer than expected.

“We had maybe half a dozen calls due to leaking rooves and branches down but it could have been worse,” Klumpp said.

“We did have calls alerting us of low level flooding around the lower end of Erina and Narara Creeks, which we haven’t had previously, even in heavy rains.

“This was probably caused by a combination of high southerly winds and high tides (in combination with the rain).

“We were alerted to flooding at Davistown following high tides overnight on May 24 and on May 25 we handed out sandbags to residents at Davistown Memorial Park, after putting the word out on Facebook and over the radio.

“We gave out sandbags to 35 or so residents and that probably cut down the number of calls we might have received.”

To the north of the region, The Entrance also copped the brunt of the storm surge with high seas swirling up and over the sea wall and lifting huge concrete slabs along the Memorial Park foreshore walkway.

A thick layer of sand was swept up to cover the car park.

On Monday, winds reached up to 35 knots (about 65kmh) and seas were 2.5m up to 4m offshore south of Norah Head, causing hazardous, large and powerful surf conditions.