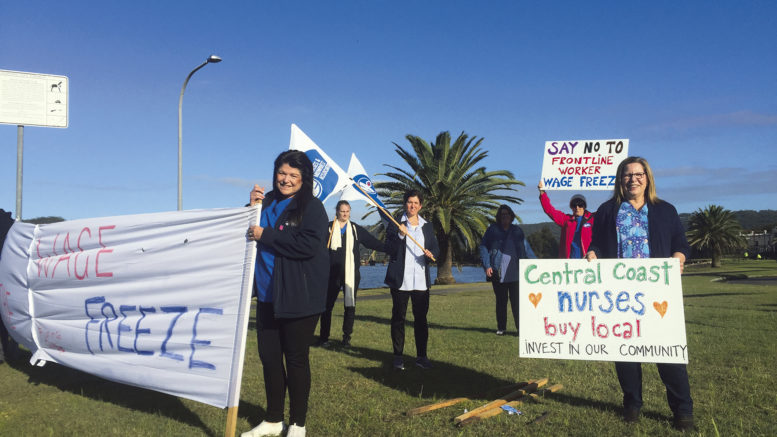 After weeks of dodging questions on the issue, Premier Gladys Berejiklian has announced a 12 month wage freeze for public servants, with unions representing teachers and nurses already railing at the decision.

Member for Gosford Liesl Tesch joined Central Coast nurses and midwives on the Gosford waterfront on May 27 for a socially-distanced protest to a chorus of car horns tooting their support.

Berejiklian said the freeze, which means a 2.5% pay rise expected on July 1 will not go ahead, will save taxpayers around $3B and enable the government to focus on preserving existing public sector jobs while also stimulating job-creation as NSW confronts the prospect of a deep recession and contraction of the economy.

“Whilst we are recovering from the health consequences of the pandemic we have yet to come to terms with the economic shock,” she said.

“The only way NSW will come out of this crisis in a strong position is if we all make sacrifices, and that’s what we’re asking our own workforce to do because we are all in this together.”

Treasurer Dominic Perrottet said it was a “tough decision” but nearly 90 per cent of the state’s workforce is in the private sector, and many of them have already suffered forced stand-downs, leave without pay, significant pay cuts, job uncertainty or losing their livelihoods altogether.

“Our public servants have been heroes during this public health crisis,” she said.

“They deserve a medal, not a pay cut.”

NSW Nurses and Midwives Association (NSWNMA) General Secretary, Brett Holmes, said the government was disingenuous to suggest it was “deeply grateful” for the efforts of nurses and midwives, then refuse a modest 2.5% pay increase.

Association member Meg Pendrick, who was at the protest on May 27, said she believed the community was behind the health workers in demanding their “legislated wage rise”.

“Most of our (Central Coast) members live and work on the Coast,” Pendrick said.

“Not only are we coping with changed workflow but we are coping with a rise in anxiety of our patients, our families and ourselves.”

Fellow association member, Michelle Cashman, said the decision was “disgusting” and an “absolute insult” to health workers, whose lives had been severely impacted by the coronavirus pandemic.

“Our lives have been so affected by this and because we are in the front line our families are extremely anxious,” she said.

Member for Gosford Liesl Tesch said our front line workers have kept us alive during this pandemic and that legislated wage increase should not be taken away.

“This is a real slap in the face for these front line workers, and it’s not just nurses.

“Our police, paramedics and teachers have been risking their lives and modifying their work practices.”

Tesch said the issue would “definitely” be raised in State Parliament next week.

Meanwhile the NSW Teachers Federation said the news was a blow as teachers returned to full-time face to face teaching this week.

Federation President Angelo Gavrielatos said the virtual pay cut was disrespectful of the role of teachers and principals who have “turned themselves inside out to deliver the highest quality of education for students during the Covid-19 crisis”.

“This is hardly the recognition teachers and principals deserve after the extraordinary efforts they have made to maintain educational continuity for our students during these unprecedented times,” Gavrielatos said.

Teachers and parents in funding protest