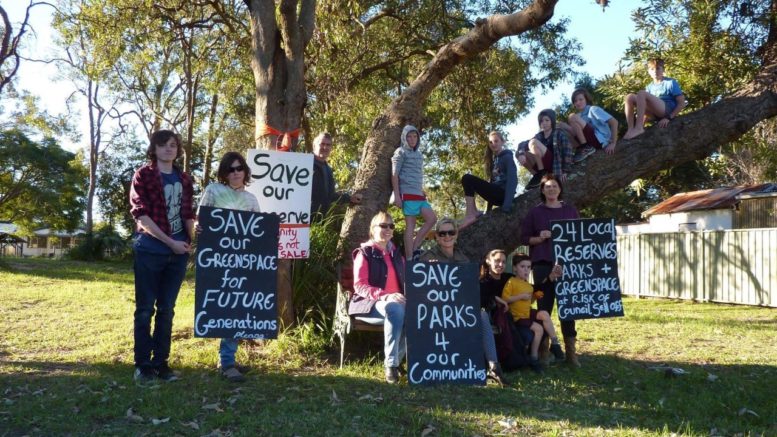 Members of Save Central Coast Reserves at a previous rally

Central Coast Council’s Local Strategic Planning Statement (LSPS) has been on public exhibition for just over a week and already it has attracted some passionate reactions.

A community group, Save Central Coast Reserves, is worried that parks are under attack from the Local Strategic Planning Statement (LSPS) which Central Coast Council has put on public exhibition.

Also, friends of Central Coast Airport at Warnervale are urging people to have their say, so that the airport gets a mention in the plan.

The LSPS lists 82 actions and priorities that council believes will guide the region’s future growth and development to 2036 and beyond.

It has been on public exhibition since Friday, May 8, and is open for comment until June 8.

The LSPS says parks might be “better utilised” or “reinvested in alternative locations”.

Founder of Save Central Coast Reserves, Sue Chidgey, and hundreds of residents, waged a successful 15-month campaign in 2015 and saved 25 local reserves, playgrounds and green spaces from being sold by Council.

“I’m very worried that our vital urban assets could be at risk again if Council approves its strategy about open space,” she said.

“My worry is that Council is considering taking away the suburban small pocket parks to replace them with large regional playgrounds.

“Every suburb should have reserves, playgrounds and green spaces for residents’ wellbeing, to exercise, to sit in nature, for children to play.

“A mum should be able to put her child in a stroller and walk to a green space.

“Large regional parks cannot, and should not, replace small suburban reserves, and residents should not have to get in a car and travel to access the benefits of a park.

“This is more and more important as the area moves to more medium density housing and it is also vital for the local environment and native animals to be not put at risk from the loss of urban green assets.

“I want residents to be aware that they need to cherish what they’ve got so they don’t lose it.

“I don’t want it to get to the point where we have specific parks being flagged, and if this strategy about parks goes through, it sets things up for that to happen.

“We have to nip it in the bud,” Chidgey said.

Mayor, Lisa Matthews, said she shared those concerns because the former Wyong Council had a history of selling off land.

Another area of concern is that the LSPS mentions Central Coast Airport at Warnervale as a place that residents had said they wanted planned for and supported, however, the airport is not mentioned again and is not listed in the actions of priorities.

“Perhaps council can clear it up and re-insert it in the plan after the submission phase,’’ he said.

“I would encourage everyone to mention it in their submissions so that it doesn’t slip under the radar.”

Mayor, Lisa Matthews, says Council was not trying to kill off the Warnervale airstrip.

Central Coast Aero Club has a lease renewal coming up and is in talks with Council.

The Mayor says discussions with the aero club have been fruitful and honest and she believes the outcome will be a win-win for everybody.

“In the past, there had been a push to extend the airstrip into an airport, it was never designed for that, and with the wetlands there, there is an inability to extend the runway,” she said.

“At the last meeting of Council, we looked at generating employment in land around the airstrip, such as for warehousing and manufacturing.’’

The State Government is currently reviewing its Warnervale Airport Restrictions Act which was introduced in 1996 to restrict the length of the runway and aircraft movements.

“Things are up in the air until the WAR Act review is completed and Council is at the mercy of the State Government on that timing and outcome.

‘’That will determine what happens next,’’ the Mayor said.

Smith, said communication between the aero club and Council had improved, “although we are yet to see any movement on an agreement”.

The deadline to have the plan ratified by the State Department of Planning is July 1.

Council’s Director of Environment and Planning, Scott Cox, said a well considered and consistent approach to planning was required to ensure that the forecast population growth was provided for and managed in a sustainable manner.

“The land use vision, planning priorities and 82 short, medium and long term actions outlined in the LSPS will guide Council’s future strategies, plans and policies, and sets in place actions to be included in upcoming Delivery Programs and Operational Plans,” Cox said.

He said in a report adopted by council on April 27 that due to the imminent timeframe, Council could consider the draft LSPS as an interim document to meet the deadline.

“’Future Community and Councillor workshops could be conducted once COVID-19 restrictions cease and a further review completed by July 1, 2021,’’ he said.

Due to the limitations imposed by the coronavirus pandemic, Council will be undertaking community consultation from May 8 to June 8 through online methods.

These will include a series of video forums for each ward, with opportunities to participate and give feedback on the draft.

Promotion of grants for the environment seen as hypocritical