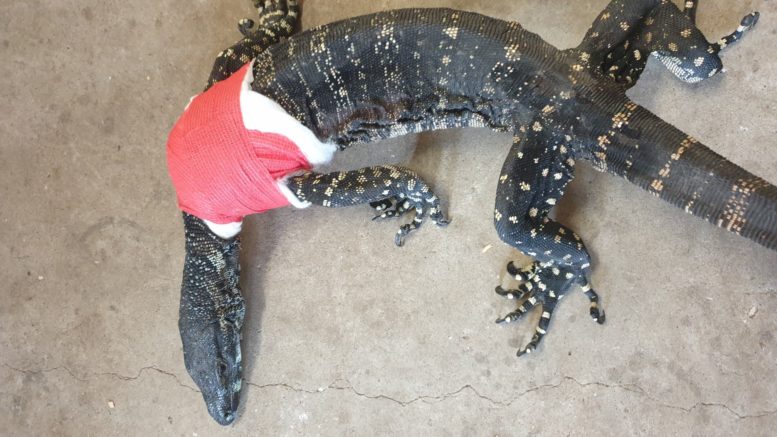 The hunt to identify a potential serial animal abuser has been reignited on the Central Coast after a goanna believed to have been shot with a bow and arrow was discovered at Kulnura.

The female lace monitor was reported to the local branch of the Wildlife ARC Society at the beginning of May, with the severely injured reptile successfully captured and placed into care on the 4th.

Samantha Chatfield is the volunteer carer looking after the reptile who she’s named ‘Arrow’.

According to Samantha, Arrow is on the road to recovery, but it will be months before she can be released back into the wild.

“The vet thinks the projectile may have been in her shoulder for around a month before she was found so she was in very poor condition when she came to us.

“Aside from being a very deep, serious wound, she was very underweight and fatigued, likely because the arrow affected her ability to hunt,” Samantha explained.

With her bandages requiring multiple changes a week and with more monitoring needed to determine if her shoulder has healed correctly, Samantha believes Arrow will be in her care until at least spring.

Despite those concerns, Samantha said Arrow was slowly coming into her own.

“She’s getting feistier, which is a good sign, even if that means copping the odd tail whip,” Samantha said.

While Arrow’s story will hopefully have a happy ending, attention now turns to the person or persons responsible for her injury.

Bow and arrow attacks on native animals have been occurring around the Central Coast sporadically since 2016, including one instance where a kangaroo joey was shoot through the head and left to die at a Wyee Point playground in 2016.

Over the years kangaroos, native birds and other reptiles have also been shot, but the culprit or culprits have never been caught.

According to Samantha, attacks have aligned with school holiday periods, which does correlate with the theory about when Arrow was shot, but whether this is the work of miscreant kids, a nasty local or a regular tourist remains to be seen.

Samantha said both NSW Police and National Parks and Wildlife were investigating this latest incident and while her organisation is focused on caring for sick and injured wildlife, she did have this message for the twisted Robin Hood: “Please stop.

With more and more wildlife coming into urban areas as a result of the devastating Black Summer bushfires Samantha hopes Central Coast residents will be more aware of wildlife in general.

“More animals are coming into urban areas because of the bushfires and don’t have any experience in these spaces.

“They’re getting hit by cars, attacked by dogs and we’re still finding some with burns.

“If you come across a wild animal that you think needs help, do not try to capture it yourself, please call Wildlife ARC on 4325 0666,” Samantha said.