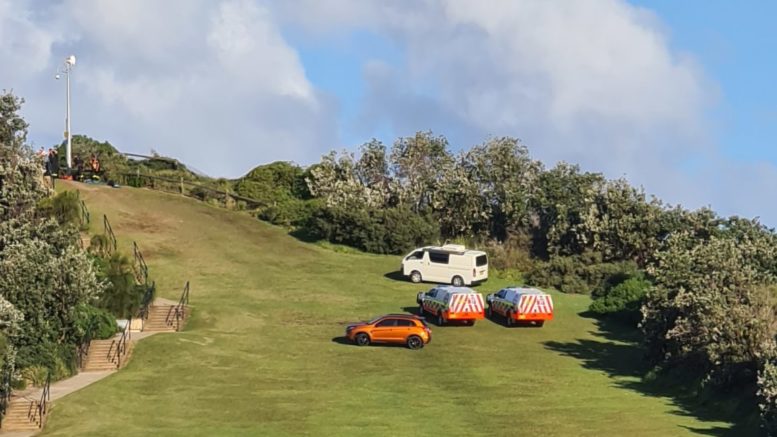 Emergency responders on the scene

A critical incident investigation has been launched following the death of a woman at Terrigal.

Shortly after 2pm on Sunday, May 17, police were called to The Skillion following reports of concern for the welfare of a woman at that location.

At about 3:15pm, the 40-year-old woman fell from the cliff with police in attendance.

A mandatory critical incident investigation is now underway, with Tuggerah Lakes Police District to investigate the circumstances surrounding the incident.

The investigation will be subject to an independent review with all information to be provided to the Coroner who will determine the cause of death and make any findings about the events leading up to the woman’s death.

No further details are available at this time, however police are appealing for witnesses to come forward.

The incident comes following a large rock fall at The Skillion the Friday before.

Central Coast Council has since attended and cordoned off the area at the behest of NSW Police.

A spokesperson for council said staff were in the process of engaging a geotechnical engineer to investigate the rock fall and to provide advice on risk and management.

“Council staff have fenced the area off with temporary fencing and ask that the community do not venture past the fenced off area,” the spokesperson said.

He also captured the aftermath of the recent fall and now believes council should permanently cordon off the rock shelf below The Skillion for the community’s own good.

“It’s very dangerous and I think council should just install permanent fencing and make it inaccessible.

“Since this last fall I’ve already seen people just ignore council’s temporary fencing and head out onto the shelf to go fishing.

“It’s not safe something needs to be done about it,” Cooper said.