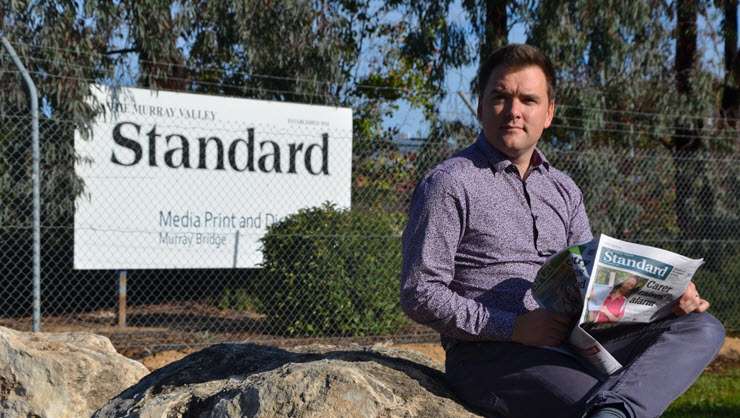 When the town of Braidwood, near Canberra, lost its local newspaper, some residents asked a very simple journalistic question: “How are we going to know who’s died?”

Obituaries, council notices and local sport — these had been essential in keeping the community informed and connected. Now they were gone.

The Braidwood Times is just one of about 152 community and regional newspapers around the country that have suspended printing due to the pandemic.

After surviving the loss of classifieds and the move towards Facebook and Google, they now face their biggest challenge yet in COVID-19.

“You want to have proper reporting of local council meetings, local court matters, local business dealings so that someone is watching, corruption can be exposed, and the community is better informed.”

As printing presses fall silent across the country, the vital role local newspapers play in regional and suburban communities — and democracy — is becoming clear.

An ACCC report sounded the alarm on these publications last year, saying they were more at risk of failing due to their heavy reliance on local business advertising, already in steep decline.

The report revealed there were 21 local government areas that had no coverage from a local newspaper — and that was before COVID-19 triggered widespread closures or print suspensions by the two biggest regional news owners: News Corp, and Antony Catalano’s Australian Community Media (ACM) network.

Those papers may never return, after Catalano backed out of a deal to buy them.

ACM has suspended print editions of nearly 100 of its regional mastheads.

Sims was worried that more newsrooms would follow: “Obviously the announcement by News Corp in relation to their [suburban] publications is just further evidence that these publications are under pressure and that’s a real threat to democracy in general.”

The picture emerging is grim. A map of closures by the Public Interest Journalism Initiative (PIJI) shows newsrooms have shut down in almost every state, with “news deserts” emerging in the Hunter Valley and parts of South Australia.

“We see this as an absolute crisis,” the journalism academic and PIJI board member, Margaret Simons, said.

“It’s not the kind of crisis where you see the effects straight away, but the impact on the nation to be democratically healthy and governable are huge.”

Many more towns like Braidwood are feeling the effects.

The Maitland Mercury has served the Hunter Valley town of Maitland since 1843, making it the oldest regional paper in NSW.

Loretta Baker, who’s lived in the town for 30 years and became its first female mayor in 2017, says the town lost far more than just a newspaper: “They’ve chronicled every flood, every drought, every natural disaster, our whole history.”

As a regional newspaper servicing a town of 78,000, the Mercury could tell the kinds of intimate, personal stories that would never get heard in a national news cycle fixated on coronavirus or the latest rumblings in Canberra.

“But more importantly, the things that won’t survive on Facebook are the highs and lows of individuals and their families,” Baker said.

“So I guess the Mercury carries our history, but also, on a daily basis, it also carries stories about our people and our personalities.”Bruce Ellen, the general manager of Latrobe Valley Express and Gippsland Times in Gippsland, Victoria said the journalism the paper does is vital because “nobody else cares about it”.

In South Australia, Peri Strathearn, who has set up his own news site after being stood down from the Murray Valley Standard, said the suspension of the paper has left readers in the dark when it comes to local issues.

“It would be such a loss to Murray Bridge and the Murraylands if there is no local voice reporting on what’s happening,” he said.

Kristy Hess, leader of research into local and community media at Deakin University, says the closure of newsrooms was a huge risk to a healthy democracy.

“We’ve seen the rise of news deserts in the US, Canada and UK, where there is no designated news source,” she said.

“We need to be very watchful of what’s happening in the Australian context.”

Not only was democracy impacted, but so too was social cohesion. In fire-effected towns, this is felt acutely.

“I don’t think it occurred to anyone that suddenly we might not have a local paper,” veteran Braidwood journalist Robin Tennant-Wood said.

“We’ve gone through such a hard time and we’ve pulled through because we’ve stuck together.”

Tennant-Wood has stepped in to fill the void in Braidwood, publishing her own newspaper Braidwood’s Changing Times at her own expense.

But other towns aren’t so lucky.

Eden, which is recovering from bushfires and battling rising unemployment, has lost the Eden Magnet — another suspended ACM title.

“Eden is hanging by a thread, economically – the town needs more of a voice, not less,” Bega Valley Shire councillor Jo Dodds said.

The permanent closure of the Parkes Champion Post, another 100-year-old ACM title which has been suspended due to COVID-19, would be an ‘unmitigated disaster’ for Parkes, Mayor Ken Keith says.

“Not having a local paper to me is almost an indication that a community is dying.”

Keith said the Champion Post was not just an important source of local news, it was one of the main ways the council communicated with the community on issues like town planning and development.

“People have had to go online to get information, but not everyone can do that,” he said.

The Mercury, which published a print paper three times a week, will still be operating online, albeit in a more limited capacity.

For many locals, particularly older readers less comfortable with online news, getting the Mercury was a kind of lifelong ritual.

“The elderly always had the Mercury, and they always did the morning walk to pick it up,” she said. “They had a chat to someone in the newsagent, there was a social connection along the way.

Baker says that without a physical paper so much of the town’s social fabric would be lost.

“Local charities and sporting events would have to look elsewhere for sponsorship and people who’d suffered accidents or injuries won’t be able to look to the Mercury for support,” he says.

This article was published by Crikey.com.au CCN wishes to thank Crikey.com the authors for allowing us to reprint their work here.