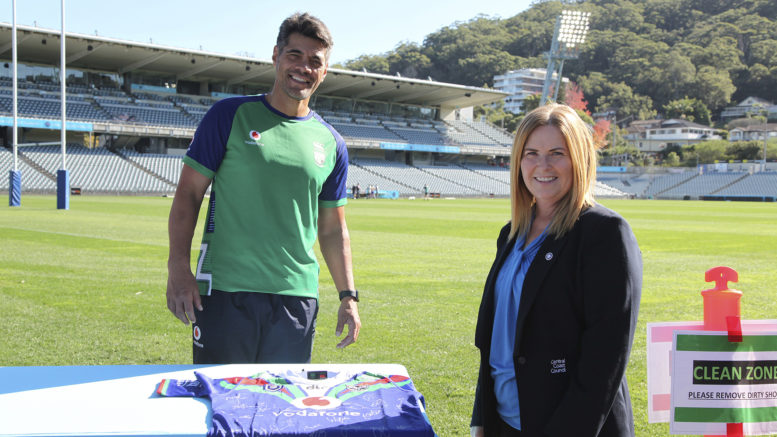 The NZ Warriors stepped up to full contact this week ahead of this Saturday night’s clash with the Dragons at Central Coast Stadium (May 30).

Warriors Coach, Steve Kearney, spoke with Coast Community News after training on Thursday morning (May 28) and said the team had a couple of positive weeks since arriving on the Coast and that he hoped the resumption of NRL matches would bring some relief to rugby league communities.

“We’ve had a fair few challenges over past 8 weeks,” Kearney said, referring to a string of injuries the Warriors have suffered since arriving in Australia in early May, culminating in the club seeking approval from the NRL to “loan” players from other clubs, including potentially Roosters prop Paosa Faamausili.

Mayor, Lisa Matthews, welcomed Kearney and the Warriors to the Central Coast with a socially-distanced exchange of gifts.

“The Central Coast community is an avid supporter of the NRL, and we are thrilled to be able to bring the Warriors here and to host other games here as well.”

Kearney thanked the Mayor and said the club was very grateful to all the people of the Central Coast.

“We’re very grateful we can call Gosford, Terrigal and the broader Central coast home for the next extended period,” he said.

“We have been well looked after here and the stadium and the facilities are excellent.

“The boys would be a little more excited however, if we could go across the road and jump in that water,” Kearney joked.

When asked about the upcoming match against the Dragons, Kearney said: “They’re in a similar position to us – 2 starts with no wins – so there will be some desperation from both of us.

“They have quality players, but they are also coming off the back of an eight weeks break.”

So, should we pencil in a win?