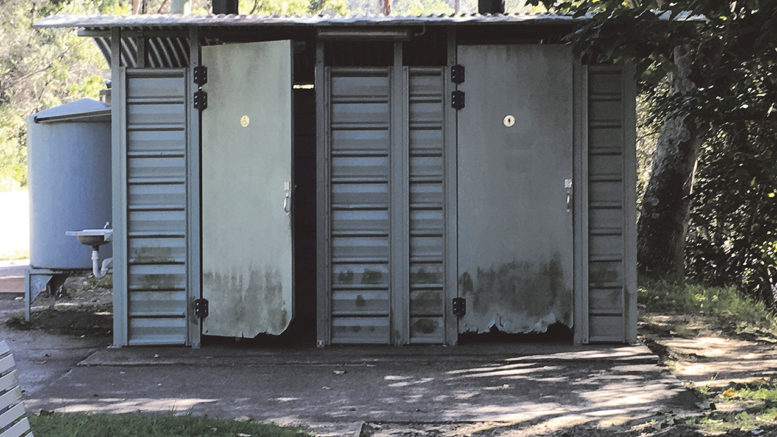 The dilapidated amenities block at Spencer

While still celebrating the opening of their new wharf in January, residents of Spencer are now focussed on an upgrade for the nearby public amenities block.

They are concerned however, at suggestions from Central Coast Council that a new block should instead be built in the small township’s CBD.

Resident spokesperson, Robyn Downham, said the suggested site is the only part of the Spencer CBD available for parking and is where the township’s regular market days are held.

“Once the toilet block is constructed there, where will people park to go the new Thai restaurant, the General Store, the Dunkirk Hotel or the new Public wharf?” Downham said.

“And where will we be able to have our market day?

“The community would like to see the old playground, which is never used, and the existing toilet block raised and upgraded – this view was upheld at a public meeting on March 15.”

Downham said community plans to promote Spencer as the ‘Jewel of the Hawkesbury River’ made it mandatory to have decent public amenities.

“The new Thai Restaurant will hopefully be a draw card, but to have a hideous toilet block directly opposite blocking the view of the meeting of Mangrove Creek and the mighty Hawkesbury River would be calamitous,” she said.

Other concerns raised by residents included: regularity of cleaning the toilets and the pump out; odour issues; CBD aesthetics; and, blocked visibility of the RFS Fire Rating Sign.

But a Council spokesperson said no decision had yet been made on the siting of the amenities block.

“Due to the challenges identified for this project, Council engaged a consultant to identify suitable options regarding design and scope for the replacement,” the spokesperson said.

“Council met with members of Spencer Progress Association in late 2019 to discuss the project status and to gain an initial understanding of the community needs and discuss possible site locations.

“Subsequently a draft concept plan of the new building was developed and presented to the Association to assist in visualising the scale of a compliant building, understand the challenges and to receive some initial feedback.

“Consultation with the broader community of Spencer will be undertaken on this project before final concept designs or plans for this project are finalised.

These activities were planned to be undertaken in March, however, due to the evolving COVID-19 situation, they have been placed temporarily on hold.