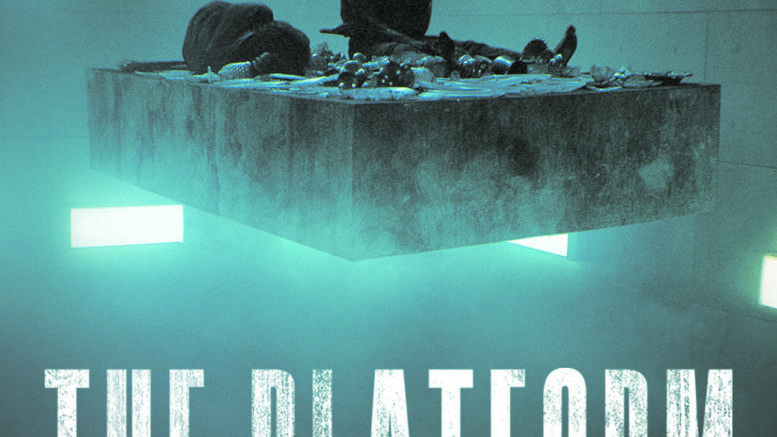 What can one say about The Platform? Disturbing. Confronting. Brutal. Gory. Clever. Thought-provoking. Brilliant?

The Platform presents us with something akin to the “Prisoners’ Dilemma”, a well-known concept in Game Theory.

Goreng (Ivan Massague) wakes up to find himself in “The Hole”, a deep, futuristic, vertical prison with countless levels that start at 0 and run hundreds of floors down into the darkness below.

A rectangular hole runs right down the middle of The Hole, through which passes a concrete platform and anything else that might fall or be pushed over.

Each day an enormous banquet is meticulously prepared by white-clad chefs on Level 0 with the aim of feeding those below – at least as many as can be catered for on a single platform.

The platform descends, one level at a time, giving the inhabitants of each cell just a few minutes to eat, before it descends again to the next level.

Unfortunately for those on the lower levels, there is not enough to make it all the way down and they are completely reliant on the good (or ill) will of those above.

The dilemma for the prisoners is complicated further by the fact that, at the end of every month, they are gassed and moved to another level.

Oh, and by the way, each prisoner is allowed to take in one item.

Goreng, as we soon learn, has come to The Hole voluntarily, for a short six-month stint, to quit smoking – his one item is a book, Don Quixote.

He first wakes up to find himself on Level 48 – “a good level” according to his cellmate Trimagasi (Zorion Eguileor).

Here they find enough food makes it down to sustain them and allow for an amicable (if not quite enjoyable) friendship.

At the end of the first month however, Goreng wakes up on Level 145 … and things are different here.

Most immediately, he finds the more ‘seasoned’ prisoner, Trimagasi, has awoken first and tied him up.

The reality is that no food ever reaches Level 145 and the darker side of human nature and our most base survival instincts, are revealed down on the lower levels in the most macabre and grisly fashion.

Trimagasi’s item of choice, by the way, is a stainless steel carving knife – and he has marked out the strips of Goreng’s flesh that he intends to help himself to for nutrition over the course of the month (and keeping Goreng alive for as long as he can will help with freshness!).

This is but the first of many horrors Goreng is set to face and, it seems at this point, six months is a very long time after all.

What is the intent of this haunting parable by Director Galder Gaztelu and writers David Desola and Pedro Rivero?

How do people really behave when confronted with life-threatening adversity?

Can we rely on human conscience or co-operation? Or is all altruism false – a disguise to a more strategic level of selfishness?

Are we any better than animals?

If only the “haves” in society would leave more of our scarce resources for the have-nots, would there be less violence and suffering in the world?

Can even the “haves” be happy – or will they just gorge on their spoils while they can?

They are so close to Level 0, but yet still unable to reach it.

Can the predicament be changed? For instance, can those at higher levels make an offering to those below with the hope of their kindness being replicated further down the hole?

Is it an attack on the inherent element of capitalism (self-interest)? Or of class? Or is it saying that a more socialist (communist) societal structure is equally doomed to failure?

Is it an attack on religion in which Level 0 is presented in The Platform as being akin to “Heaven”, somewhere high above from where the source of life comes, while somewhere down in the dark depths, is a Hell where humans turn to evil and violence?

The dream of Level 0 is such that Goreng and other prisoners find themselves seeking ways to ascend there, or at least appeal to those there for atonement – a gift, a message, a prayer.

On more than one occasion, the film asks whether the prisoners are driven to evil and violence by those at the top, or is it simply part of the nature?

Can we rely on human conscience?

Be warned, the filmed is brutal and scary (not one for children), with similarities to The Road or The Snowpiercer.

If you’re already suffering quarantine anxiety, this will not help.

But fans of the genre will find plenty here to admire, having already awarded it the People’s Choice Award within the Midnight Madness strand at last year’s Toronto film festival.

The Platform, a Spanish film (with sub-titles) was reportedly made on a small budget and benefits from an efficient storyline, timely movement between moments of light and dark and some outstanding performance by Massague and Eguileor.

It certainly achieves one thing – just when we are despairing about the current state of the world, it reminds us just how well off we are … but also just how vulnerable our ‘peace’ is.