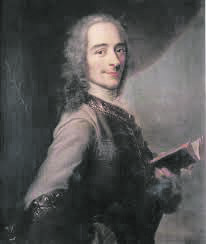 Missive #16: The Age of Enlightenment (wait, did it just end?)

Between stints under the pyramid and feeding his fish, Thommo had installed yet another amazing app on his phone. “Get fitter by imagining you’re exercising” was his favourite of all since it allowed him to train and eat a pie at the same time, all from the comfort of his couch.

After the Society’s run-in with the Blue Provocation in Pearl Beach, they had all laid low for two weeks.

Thommo had held up best of all – while the others enjoyed venturing out in costumes with their wheelie bins (Johhno’s chicken suit from the Woy Woy Leagues production of “Chicken Run” still fit perfectly), Thommo had busied himself some of his favourite Enlightenment works … most notably Voltaire’s “Candide”.

Just as he was settling into it, there came a scratching and a whimpering at the front door.

Thommo let him in and rewarded him with a little of his beef jerky – the poor little bugger had been walking himself for weeks now, after Boof’s missus dobbed him into the police for violating social distancing protocols in their bedroom.

Thommo noticed a note tucked under the foxy’s collar:

And, so, at dawn the next day, we met atop the majestic Blackwall Mountain, ironically, the only mountain in NSW that hadn’t had a bushfire this past summer.

“What’s so important as to get us all the way up here at sparrows?” grumbled Johnno.

“It’s the shutdown. It’s bad and getting worse” said Robbo. “My last ounce of optimism dried up yesterday. I’m a shell of my former self.”

Robbo didn’t look like a shell – in fact, he seemed now to be a much larger version of former self.

“It’s all a deliberate plan to end the Enlightenment … to drive us back into the clutches of the Church. They’ve stopped educatin’ kids and they even let that Pell fella out … convenient timing don’t you think?”

“Well, that all doesn’t seem so bad,” said Johnno. “Religion has done a great deal of good for society.”

“Exactly,” I said, trying to lighten the mood. “I mean it was uplifting to see a bishop exonerated by a non-religious high court for something that might not have happened. We shouldn’t believe anything if there’s no hard proof … er, unless it’s in the bible, I mean.”

“And what about the bloody cops,” continued Robbo. “Trailing my Hilux around and pulling me over and giving me a fine every second day.”

“You should try getting it registered, mate,” said Johnno.

“Anyway,” I interrupted. “How is one supposed to deal with the absurdity of our current situation – “Schools are open … but keep your kids home”, “self-isolate … but stay connected”, “hibernate your business … but keep your staff on”, or “keep fit, but don’t go outside”.

“Oh Joffa, have I got the app for you …” began Thommo.

But just then his phone started blinking.

“I’m not goin’ anywhere,” I said getting worked up. “We can’t let the Enlightenment end … I mean what would the Anzacs say, they fought for our freedom.”

“Wait,” shouted Thommo, pulling out his copy of Voltaire’s Candide. “Voltaire etched out the seeds of The Enlightenment through satire – he made fun of religions, theologians, governments, armies and even philosophies and great philosophers like us.”

“The problem he reckons is our expectant optimism. We’re all too bloody optimistic. Just like his Professor Pangloss, always proclaiming everything was for the best, no matter how bad things were. We just need to be less optimistic.”

“Doesn’t sound very Enlightening?” said Johnno with a wry smile. “How did that lift the Commoner up out of his misery?”

“It didn’t … it just made him realise all the Princes and Priests were just as flawed as he was. And it’s now been scientifically proven the best way to get ahead in life is to drag everyone else back down to your level.”

We turned our attention back to the sun rising over Booker Bay and took out our medals to commemorate our most famous war moment … which also happened to be our greatest ever military defeat.

Suddenly, the foxy began to howl and, within moments, he was performing The Last Post in perfect tune, B minor.

“Trained him all year for this,” said Boof, as the flashing blue and red lights approached. “We did our last practice last night, watchin’ The Lighthorseman on Netflix.”