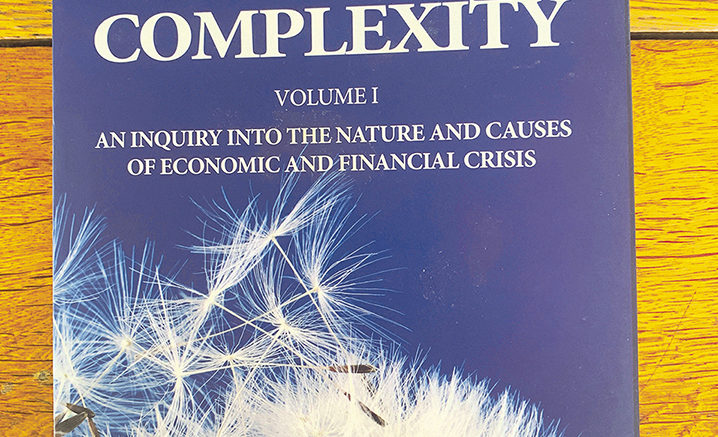 Crisis and Complexity by Ross Barry

Crisis and Complexity: An Inquiry into the Nature and Causes of Economic and Financial Crisis:
Author: Ross Barry

These are unprecedented times as we keep hearing.
So, while we would not normally allow such self-aggrandising behaviour as a Publisher using his own newspaper to promote his own book, we felt that given the sharemarket crash going on, it was a topic that was just too, well … topical.
Ross Barry published Crisis and Complexity in 2013 as the culmination of three years of research into over a dozen financial catastrophes since the Mississippi Bubble of 1720.
The research finds that the period of time between major global financial meltdowns is approximately 9-10 years, with the next one due around 2017-2018 – a prediction made some seven or eight years ago.
Two years too early it turns out, but the nature and pattern of the share market crash we are now witnessing is almost exactly as foretold in Crisis and Complexity.
And the key, Barry says, is history.
Indeed, he laments that modern economic has become drained of its historical context and is now little more than a set of linear-reductionist equations.
Instead, Barry drills down into the rich tapestry of each crisis – its unique characters and the unique events that shaped each one.
The first chapter is set in the Rue Quincampoix in Paris, with the infamous John Law, the inventor of paper money, standing by the richly embroided curtains of his upper storey window staring down at an angry mob of investors baying for his blood.
We follow the story behind of the famous collapse of the Mississippi Company and Law’s experimental system of paper money.
Barry then takes us forward through time – the 1848 collapse of British railroad stocks, the collapse of Overend & Gurney in 1866, the so-called “Corner House” of Gurney lane in London, which at the time of its collapse much far more important to global finance than either Barings or Lehman Brothers ever was; the fall of the Knickerbocker Trust Company in 1907 and the subsequent rescue of New York’s financial system by J.P Morgan; the Great Crash of 1929, the 1970s Oil Crisis and so on and so on.
As we follow the ebb and flow of global financial market boom and bust, we see the major step-changes in the prevailing economic paradigm in which each one occurs – from mercantilism, to the classical theory of economics first laid down by Adam Smith, Keynesianism and the new paradigm of neo-liberalist ‘economic rationalism’.
In the spirit of Thomas Kuhn’s theory of Scientific Revolution, Barry shows how these “Fundamental Laws” of economics and finance have undergone big evolutionary step-changes over time, with each new regime being ushered in one the back of some major financial dislocation.
Modern Finance Theory struggles to explain why such crises occur, and why they re-occur.
Even with all the modern mathematical tools now available, Yale Professor Robert Shiller, still describes share market crashes as the “dark matter of finance”.
Barry’s thesis provides a more powerful explanation by viewing financial markets as “complex adaptive systems”, with a natural tendency not toward equilibrium, but toward instability.
He shows that Complexity Theory, which is more commonly used by natural scientists, provides a superior lens through which we can see major financial crises for what they are – the periodic failure of the economists’ Fundamental Laws.
Barry had good reason to try to understand the true nature of share market crashes.
As a pioneer of the Industry Superannuation Fund movement, Barry has spent 25 years investing hundreds of billions of dollars of assets held in the retirement accounts of over a million working Australians.
He has overseen investment portfolios through the 1990-91 recession, the collapse of Long-term Capital Management in 1997, the 2000 Tech Wreck and the 2008 GFC.
Barry says that there’s no point pretending crises are unusual, or some inexplicable “Black Swan” event.
“Share crashes are a natural product of highly connected, rules-based, self-organising systems that naturally generate often violent emergent properties.”
Modern finance theory, he says, is built on reductionist mathematical models and normal probability “bell-curves” which show the probability of them happening is so low, that we just assume them away.
“An investment framework that seeks to understand complexity can lighten the dark and foreboding notion of crises, as crashes would then just be seen as part of the normal.”
Did this knowledge of complex systems help Barry avoid the latest COVID-19 crash?
“Well, last year I acquired a highly cyclical regional media company, whose sole source of revenue is from small business advertising … I’ll let you make of that what you will.”

A free copy of Crisis and Complexity, 2013, by Ross Barry is available for all readers of Central Coast Newspapers until they run out by emailing keeper@centralcoastnews.net

Book Review – Who is Maud Dixon