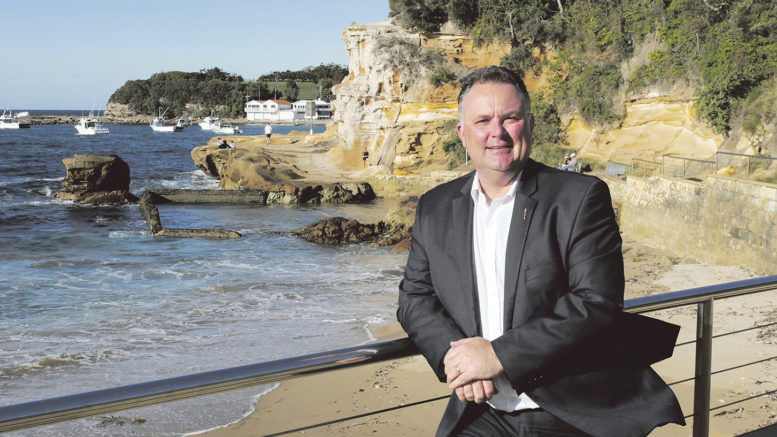 Member for Terrigal, Adam Crouch, at Terrigal, where the new boardwalk will be installed

Construction is expected to begin on the Terrigal boardwalk and viewing platform in April, following an announcement on March 12 that the contract for the project had been awarded to Land & Marine Group.

To stretch between Terrigal Beach and The Haven, the boardwalk was the subject of lengthy debate and several motions at Central Coast Council early in 2019, before approval was finally given to the $5.8M project in June.

The project is being jointly funded by the State Government and Council, to the tune of $2.938M each.

Parliamentary Secretary for the Central Coast and Member for Terrigal, Adam Crouch, said 2,000 residents had signed a petition supporting the project.

“A boardwalk at Terrigal has been talked about for decades and I am thrilled that the tender has been awarded for work to finally begin,” Crouch said.

“Council expects construction to begin after the April school holidays and will occur in conjunction with the replacement of the ocean pool,” Crouch said.

“The boardwalk will be 277 metres long and include integrated seating, lighting and a viewing platform.

“It will provide a more inclusive accessible route so that everyone in our community can enjoy this space,” Cr Matthews said.

“In addition, this project will help grow tourism and boost the local economy.

“We have listened to the community and taken on board feedback received during community consultation activities, which demonstrated a majority of support from residents.

“We are grateful to the NSW Government for funding of a project which will deliver many social, health and economic benefits for our community.”