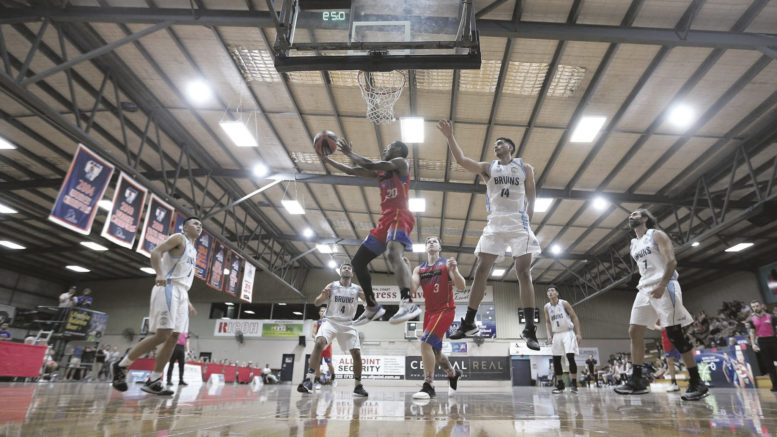 The Central Coast Crusaders got their 2020 Waratah Basketball League season off to a strong start with comfortable wins in both the women’s and men’s matches against the Bankstown Bruins, at Breakers Indoor Stadium on Saturday (March 8).

In the women’s match, the Crusaders poured on 24 points in the opening quarter to take control of the match and were never really troubled after that, eventually running out 81-57 winners.
The performance was marked by some crisp passing, with 20 goal-assists for the match.
The players also smothered the Bruins attack for much of the game, forcing 30 turnovers.
There were strong performances across the court including from American college import, Jessica Kuster, and local star, Darneka Rowe, among many others.
Two of the team’s development players, Abby Cracknell and Bronte Moore also had a big impact.
Women’s team coach, Jared Scoines, said he was very happy with the performance after the game.
He has been coy so far about the team’s prospects this year, saying his focus remains on player development and building team culture, given the mix of new and old faces in the team.
That focus was evident on the weekend, as the players showed a deep level of teamwork and trust with a series of deft passes and goal assists.
In the men’s game, the Crusaders also chalked up an 80-60 win over the Bruins, built upon a strong defensive performance.
The team was buoyed prior to the game by a ceremony to unveil the 2019 Championship Flag, following their epic victory in last year’s final.
Ollie Robilliard, Mitchell Rueter and Matt Johnson were all in fine form, while Callum Jenkins was in the thick of things once again, scoring 20 points and taking 11 rebounds.
It was Jenkins, of course, who tipped in the winning goal with one second to spare in last year’s final.
The team’s head coach and former Sydney Kings player, Julian Khazzouh, was also happy with his side’s win.
“It was little bit scrappy, but we’ll take it”.
“Anytime you bring in a new coach with a new system, it takes a little bit of time to wrap your head around it and the guys have really bought into that,” he said.
Khazzouh was particularly impressed with his side’s work in defence.
“Defence will be the backbone of our team this coming season and to keep our opponents to 60 points in our first game is a good start,” Khazzouh said.
“The exciting part for the coaching staff is that we still have so much room for improvement on both ends of the floor and we will strive to get better each week.”