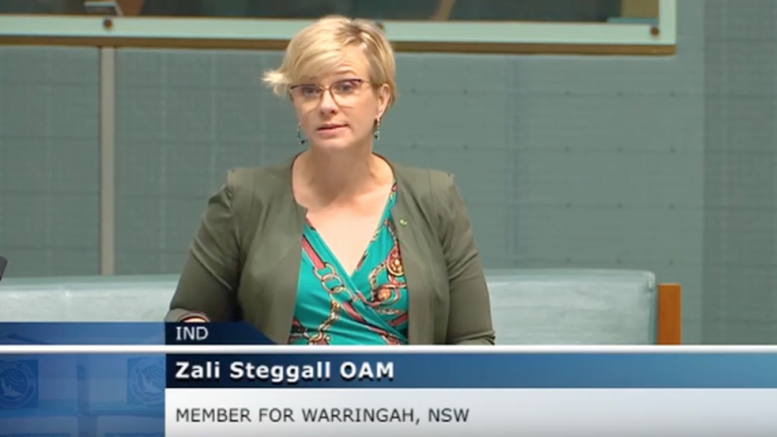 MP Zali Steggal tables the Save Our Coast petition in parliament.

[Canberra] Zali Steggall MP (Independent) for Warringah tabled a petition to Federal Parliament at 1.44pm on Tuesday afternoon in opposition to the establishment of a petroleum industry off Central Coast, Newcastle and Sydney’s Northern Beaches.

The 59,000 strong petition had reportedly 23,000 Central Coast signatures, collected over 18 months calling for the cancellation of the federal Petroleum Exploration Permit 11 PEP11 and an end to seismic testing.

Coast Community News obtained the script of the speech, that we present here:

“Mr Speaker, I rise to table a document, subject to the approval of the Standing Committee on Petitions, signed by more than 60,000 concerned residents, who are united in their opposition to offshore seismic blasting and drilling for gas in the pristine waters that stretch from Newcastle to Manly. This much loved and beautiful marine environment is an area of rich biodiversity and is part of a whale migration path. This coastline is also home to internationally famous beaches and sustains significant local industry and tourism. This stunning area has become rather clinically known as “PEP11” in reference to the ‘Petroleum Exploration Permit 11’ which it is subject to. A private company – ADVENT ENERGY – had been given approval for underwater seismic testing and is now applying for a permit for underwater gas drilling. The very thought that we would be using these waters to drill for fossil fuels is appalling. And 60,000 people agree. I commend the Save our Coast group for their concerted efforts in drawing the public’s attention to this issue and for compiling the petition. Whilst the planned seismic testing has been cancelled, Advent Energy is proceeding with its plans for drilling.[1] This is totally unacceptable and brings renewed urgency to the petition I submit today. Thank you Natasha and Save our Coast for your care of this precious coastline.“