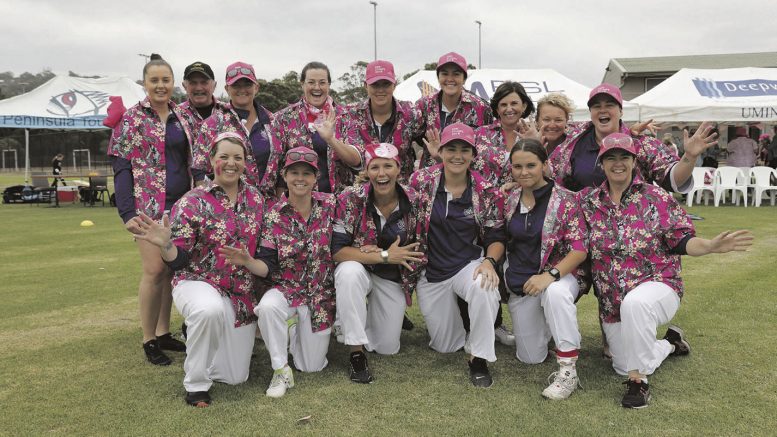 The Spirit women in their Hawaiian shirts Photo: Nick Friend

As reported last week, The Peninsula’s Southern Spirit Cricket Club has reportedly received what is possibly the largest fine to ever be issued in the history of the Central Coast Cricket Association (CCCA) … for wearing Hawaiian shirts.

On Wednesday evening (February 5) a formal hearing was held to appeal an alleged fine of $1,000 handed down by the CCCA along with a loss of competition points, and a four-game suspension of the team’s captain.

It’s also understood that the CCCA denied two requests from the club to authorise the shirts.

The Spirit Club Secretary, Jack Wilson, said the Club was unable to comment on the matter at this stage, however we believe that a formal response will be forthcoming later in in coming days.

The fundraising events are held in support of the Jane McGrath Foundation, a breast cancer support service charity with very close ties to cricket at the federal, state and regional levels.

In support of the event theme, players and spectators usually incorporate pink into their uniforms/clothing on the day, but for players, it is expected that they do so with approval from their regional body.

While neither of the major parties involved could confirm specifics, both the Jane McGrath Foundation and Cricket NSW have issued statements regarding the incident.

“We are extremely grateful for the incredible support of all our fundraisers, including the Southern Spirit Cricket Club. Cricket NSW also commended the Spirit on their fundraising efforts in their statement.

“Cricket NSW commends the efforts of Southern Spirit Cricket Club to raise over $5,000 for the McGrath Foundation.

“Cricket NSW also acknowledges the right of the Central Coast Cricket Association to administer the sport in its region.

“In this case, the Southern Spirit Cricket Club ignored the Association’s repeated requests that the players not wear Hawaiian shirts.

“Central Coast Cricket Association has advised that it will donate the $1,000 fine, in the name of Southern Spirit Cricket Club, to the McGrath Foundation,” a Cricket NSW spokesperson said.

The Spirit’s Women’s T20 team is the Club’s first to take part in the Association’s women’s competition, which is now in its second year.

They’re currently sitting in second place on the competition ladder as of the conclusion of Round 13.