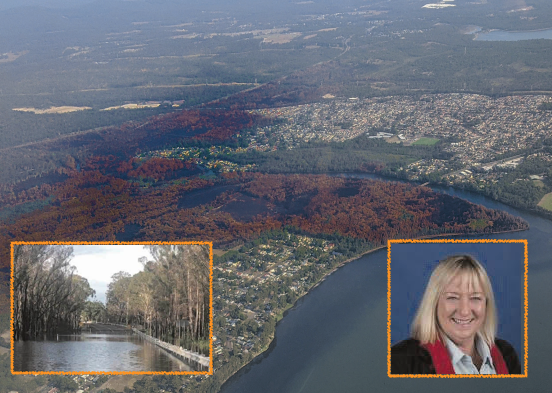 Budgewoi Ward Councillor, Jillian Hogan, is appalled at the response from the State Government to the recent bush fires and now the floods.

She said the north of the region had been ignored.
“There has been absolutely no communication before or after the floods,” she said.

“There were no flood warnings, nowhere to access live and up-to-date information on the peak heights and tides, nowhere local to get sandbags, the closest was Wyong and no way to get there, and now the immediate crisis is over, the closest recovery centre is The Entrance or Gosford.

“So what do people do when electrical equipment is compromised, what do they do when sewer is through their house and importantly how does this impact on people’s health after trudging through flood waters?
“This is simply not good enough and I support the Mayor in her message to the State Government to visit the area and offer support and information to residents.

“More than 2,000 houses and businesses have been flooded around Budgewoi Lake and, again, all we hear about is The Entrance.
“Last week’s Council meeting came to a head with Councillors Bruce McLachlan and Jilly Pilon asking for funds to be put in the budget for the design of a breakwall for The Entrance while at the same time the north is drowning in water and sewer.
“They spoke about businesses and at no time did they speak about families, people and homes.

Cr Hogan said there were councillors that had been on Council for over 20 years but now, with an amalgamated Council, they are holding this Council accountable after only two years in office. “I ask them: What have you done to save the lakes?”