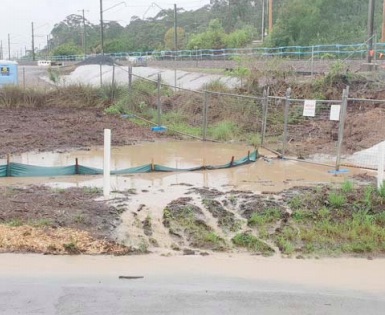 Flooding at the construction site for the rail maintenance facility. Archive 2018

[Forum] Minister Andrew Constance said he is a changed man after his experience fighting the bushfires around his home.

Although no one would wish such trauma on anyone, the residents of Kangy Angy would hope that his promise of listening to residents and understanding that community is valuable and important, is now his new approach.

For over three years the community fought the development of a Rail Maintenance facility.
The price was high with the destruction of 4,000 trees, a rare froglet’s habitat, and habitat for endangered birds in an area that is a flood plain and regularly floods.
We warned them this land was totally unsuitable for what was proposed.
They even had a Council endorsed alternative, appropriately zoned and with no extra costs, like a $50M bridge and major road changes.
Information is that the costs have blown out, let alone the costs to the environment, and completion delayed.

However, mother nature has wreaked revenge with the site flooded to the extent we warned them about.
All through this argument, Minister Andrew Constance refused to acknowledge us, speak with us or even read our submissions.
We do so hope this changed man will make the effort to take into account the superior knowledge of residents on the ground, before he makes his paternalistic decisions.
The only response to this disaster left for the residents of Kangy Angy is to say “I told you so”.