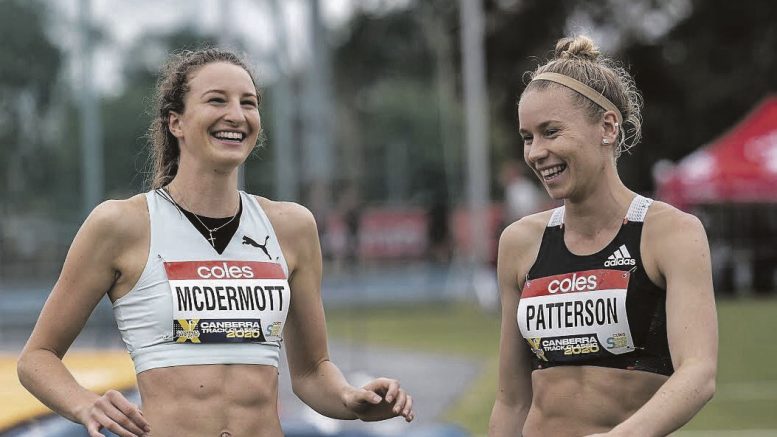 Nicole McDermott on the podium with Victoria’s Eleanor Patterson

After clearing her personal best and the Olympic qualifying height of 1.96 metres, McDermott lined up to equal the national record of 1.98 metres in wet conditions on the Canberra track.

She initially looked to have cleared the bar but caught it on the way down.
McDermott’s jump of 1.96 metres is her second clearance at that height, having already qualified for the Australian Olympic team at the Doha World Championships in late 2019.
Fellow Australian high jumper, Eleanor Patterson from Victoria, also cleared at 1.96 metres and won the event from McDermott on countback.
“It was so good being on the track with some amazing athletes and not feeling inadequate, being able to face up with the girls that are winning medals and just have fun with them all,” she said.
Inadequate? Hardly.

The 186cm tall McDermott is currently ranked 11th in the world and she and Patterson have established themselves as the top two women’s high jumpers in Australia, as they both strive to crack the two metre barrier.
Her amazing sense of comradery, positive energy and signature ‘smiling setup’, has also seen Nicola weave herself into the hearts of fans and competitors around the nation and become a great ambassador for Australian sport.
Last year was a big year for McDermott, who trains with local coach, Matt Horsnell.

Not only did she qualify for the Olympics, but she was announced as Sydney University’s Blue Athlete of the Year and Central Coast Sportsperson of the Year.
Gosford sprint champion, Tyler Gunn, also inched closer to a place in the Australian Olympic squad with a strong performance in the men’s 400 metres at the Canberra Track Classic.
The 20 year old Gunn was quick out of the blocks and powered down the home straight to win his division in 46.94 seconds.

The time is still two seconds outside of the Olympic qualifying time, but it was almost a second faster than his time in the NSW Country Championships in Dubbo in mid-January.
Gunn was sidelined by a hamstring injury in 2019 and only returned to competitive racing at the beginning of 2020.
The Australian Track Classic circuit heads to Sydney next with the Sydney Track Classic on Saturday, February 22.