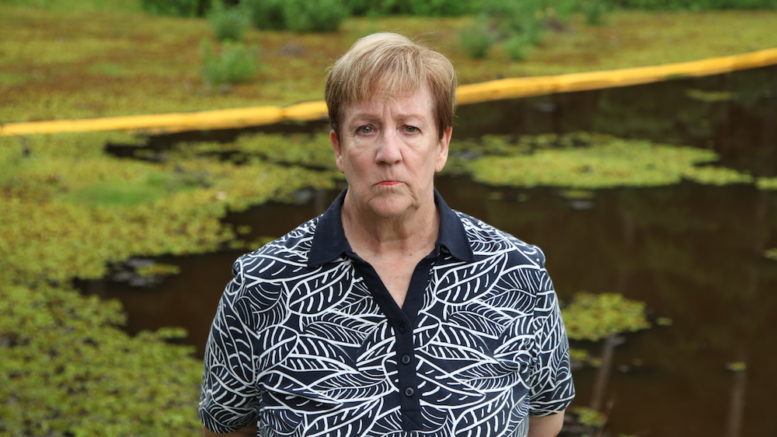 One of the Coast’s iconic wetlands is in peril and could put other waterways at risk, Springfield residents maintain.

The residents are ramping up their push for action on an uncontrolled weed infestation on a privately owned portion of Springfield Pond Wetland.
Resident spokesperson, Glenys Ray, said the current situation was “totally unacceptable” to locals as well as many in the wider Central Coast community.

“There are predominantly three noxious aquatic weeds involved in this infestation,” Ray said.

“This issue has been discussed in Central Coast Council meetings on a number of occasions and Council funds have already been employed on the Council owned section of wetland.

“Although significant progress has been made, particularly once Council received a State Government grant of $125,000, the wetland involved is in a precarious position and the resources employed by Council officers and a number of contractors cannot be effective unless the owner of the nearly 4,000sq m of privately owned wetland takes immediate action on his upstream portion.

“We have been delighted to see the progress and congratulate everyone who has contributed to the Council owned ‘half’ in being well on the way to rehabilitation.

“Enormous progress has been achieved (but) we should not need to rely on a boom to hold back the massive weed infestation consuming the privately owned portion of wetland.

Ray said that since the weed infestation took hold in 2016-17, the waterbirds which had been plentiful in the area have completely disappeared.
“Since Council cleared its portion of the wetland in 2019, we have seen a gradual return of birdlife,” Ray said.

“Once the weed was cleared, we saw some turtles rise to the surface which must have been trapped under there for up to two years.
“But the weed on the private section of the wetland is still so thick that wallabies can be seen bounding over it.

“And it has become a mecca for mosquitos.
“The ongoing maintenance of the Council owned section part of the wetland is time limited and unless this privately owned section is managed urgently, infestations will continue to occur at the Council end, and potentially we could end up back where we were in January, 2017, with the entire almost 8,000sq m totally reinfested and blanketed by weed again.”

Ray said her understanding was that the owner had a legal obligation to manage the weed infestation on his property under the Biosecurity Act.
She has written to Council asking for clarification on: what requirements or orders, if any, have been placed on the subject land in terms of the Biosecurity Act; the time frame allowed for response by the private landowner; and, details on the next step in terms of action and timing of that action if the owner fails to implement an acceptable plan.

Central Coast Council did not provide comment prior to deadline and attempts to contact the owner of the privately owned section of the wetland were unsuccessful.

School keen to connect with community

A night to remember for Rhyan