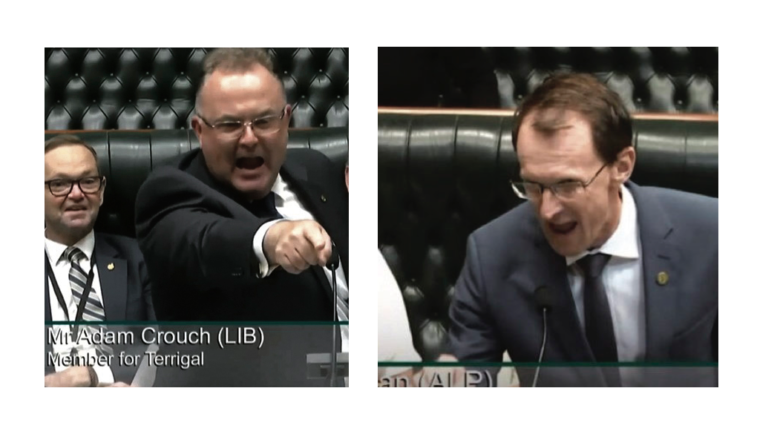 State Member for The Entrance, David Mehan, was ordered to leave the NSW Parliament Chamber on Tuesday, February 25, because of his use of foul language during a debate between he and Parliamentary Secretary for the Central Coast, Adam Crouch.

It was after Shadow Minister for the Central Coast, Wyong MP, David Harris, raised Tuggerah lakes flood management and the recent storms and flooding around the lakes.

Harris said that even though a Tuggerah Lakes Floodplain Risk Management Study and Plan was completed in November, 2014, and adopted by the former Wyong Shire Council, which pointed out serious issues, neither local nor state government had done any significant work since then.

Crouch said that “six times since 2019, February 26, March 26, October 8, February 11, November 25 and December 9, motions were raised in Central Coast Council to look at addressing the issues (about) dredging and the quality of the lakes”. Mehan responded:

“What have you done, big mouth? You’ve done nothing.”

Crouch: “Those Motions were blocked by the Labor and The Greens councillors … interesting that Members opposite come in here and cry crocodile tears”.

Mehan: “You need to fund it. You got them into this situation, you dope.”
Crouch: “You guys blocked the funding for Ettalong and you have done it for The Entrance.”

Mehan: “You haven’t got a clue. You didn’t open your mouth until after the floods.”
Crouch: “You should be ashamed of yourself. You are totally out of your depth buddy.”

At this point, Temporary Speaker, Sonia Hornery, directed Mehan to leave the Chamber and she also said Crouch’s comments were “controversial”.
Mehan later apologised for his behaviour.

“This is not standard practice and I regret my language,” he said.
“However, I do not apologise to the NSW Government for their inaction to date to reduce the flood risk on the Tuggerah lakes and The Entrance Channel.

“I am most disappointed that Ministers have failed to respond when I have respectfully raised the issue of flood risk many times in the past.”
Crouch called for better standards from Labor MPs.

“Mr Mehan was ejected from Parliament for repeatedly saying f*** and I am shocked and appalled that a Member of Parliament would think this language is appropriate,” he said.

“First, the Labor Mayor of the Central Coast had a meltdown on Facebook, and now the Labor Member for The Entrance has been thrown out of Parliament for being unable to control his own words.”

“They’re aggrieved because they don’t control council and if they stir up enough dissatisfaction with Council it will help them get more votes in the upcoming Council elections.”

For more details on the issues regarding The Entrance Channel and related flooding, see Wyong Regional Chronicle Issues 183 and 184.