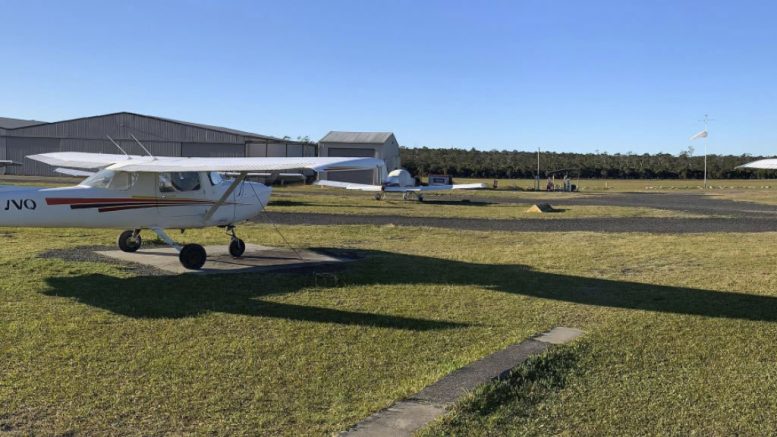 Central Coast Aero Club President, Andrew Smith, wants to “clear up any confusion” and point out the “easy, fair solution” for the future of the airport at Warnervale.

“The scare campaign by the latest anti-airport group and the mismanagement by Council of the site is a terrible thing,” he said.
“The Aero Club does not support extending the airport outside the current fenced boundary, and we believe that the Porters Creek Wetland is a vital ecological reserve and needs protection.
“We believe that a 90 percent grassed, greenfield site such as the airport, directly upstream from Porters Creek, is a better land use for this sensitive area than acres and acres of concreted light industry which will drain downstream into the wetland.”
He said that in 1995, a company called Traders Finance signed a deal with the then Wyong Council to improve the airport site and build a new runway up to 1800m long.
“An airport action group formed, and through a comprehensive scare campaign, managed to pull off a huge act of misdirection and convinced the Minister at the time that there would be 24 hour a day Boeing 747 operations,” Smith said.
“However, the fact is that the Boeing 747 requires a minimum of 3292m of runway (CASA manual of standards Part 139).
“Jets cannot and will never land at Warnervale.
“The runway is 1200 metres long.
“This is not even remotely long enough to take a turbofan or jet aircraft.
“The smallest jet airliner in use in Australia, which requires the smallest runway length for take-off or landing, is the Airbus A320.
“It requires 2058m.
“The terrain around Warnervale dictates that this length runway is simply not possible.
“The Labor minister of the time, Paul Crittendon, panicked at the perceived community outrage, and hurriedly put together a State Government Bill which became the Warnervale Airport Restrictions (WAR) Act 1996, which limited the scope of the airport.
“The WAR Act limited the runway to a maximum of 1200m without Ministerial approval and introduced a curfew between 10pm and 6.30am.
“Importantly, and this is what has caused all of the recent problems, the WAR Act also had a trigger clause limiting the daily movements to 88 in the event the runway was extended at all after the date of the WAR Act being enacted.
“In 2015, the former Wyong Shire Council, without consultation with any of the airport stakeholders, elected to improve the runway, by resealing it and strengthening the pavement.
“It is alleged that they lengthened the runway at this time.
“This had the consequence of triggering the movement clause.
“In 2019, Central Coast Council informed the Central Coast Aero Club that the movement clause had ‘probably’ been triggered.
“Council refused to admit why it had been triggered, and instead attempted to put the onus on the Aero Club to ‘self-limit’ their operations.
“However, the Act requires the airport operator to control movements, ie – Council.
“The Aero Club quite logically asked for proof that there was any requirement for the club to be required to degrade their ability to operate.
“Council refused, as they will not admit to this day, that they were the trigger cause of the movement cap being enacted.
“Since then, Council has also voted to re-vegetate parts of the runway environment, causing a 180m length of the runway to be barricaded from use.
“Council has refused to trim the trees on the approach path to the runway, causing aircraft to follow an eight percent profile now, rather than the CASA recommended 3.3 percent.
“Twin engine aircraft are now having to pass within metres of the tree line to effect a safe landing.
“Council’s staff and head of Governance at the time, recommended that the trees be trimmed as was common historically, as both Council’s and CASA’s risk matrix allocate the situation as a high risk.
“Yet, Council has refused, despite their own code of conduct mandating that a high risk cannot be accepted, and trees being routinely trimmed daily across the coast for thousands of commercial reasons.”
Smith said the aero club has operated at Warnervale for 47 years without fatality or injury and more than 20 million kilometres flight time.
“We have trained thousands of pilots, and some have gone on to fly for Qantas, Emirates, the former Ansett, Qantaslink, Regional Express, Border Patrol and numerous Aeromedical, Charter and Training organisations throughout Australia and overseas,” Smith said.
“We also conduct highly skilled aviation maintenance works, engine overhaul, airframe overhaul and painting, interior fitouts, avionics repair and upgrades in our busy maintenance division.
“This can’t be understated.
“Part of our charter is to foster aviation in all its forms, and a big part of this is running community events to help introduce aviation to new participants as well as provide charity joyflights.
“To do all of this, however, we need to be able to take-off and land.
“The most important part of a pilot’s early training, naturally, is learning how to safely land in all sorts of conditions and emergencies, and most of their early training is practising take-off, approaches and landings.
“A light training aircraft can do around 10 of these circuits per hour, and each equates to two movements under the Act, a take off and a landing.
“We could easily hit the 88 movement cap within one or two hours.
“If the highly restrictive, and bizarrely arbitrary (we are unable to find any justification for where the 88 figure came from) cap is enforced, the club will need to lay off most of their staff, sell most of their aircraft, and most likely close altogether.”

ACF calls on all candidates to support tree policy