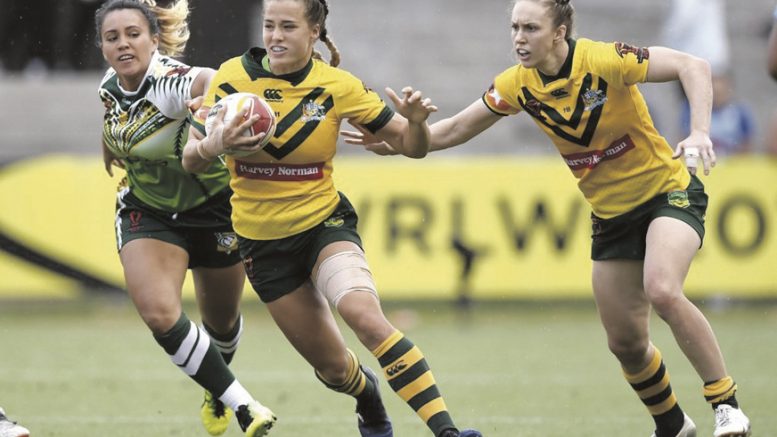 Isabelle Kelly has announced that she will join St George Illawarra for this month’s NRL Nines.

Kelly, who hails from Toowoon Bay and first played for Berkeley Vale in 2015, has played the last two seasons of NRLW for the Sydney Roosters.
Kelly catapulted to fame in 2017 when she made the Jillaroos and scored the opening try against New Zealand.
In 2018, she then scored two tries against Queensland in the Women’s State of Origin clash and took out the Nellie Doherty Medal for player of the match, before being also awarded the 2018 Golden Boot as the world’s best female player.
Kelly, who recently married partner Jake Callister, will join the Dragons outfit for the two-day tournament in Perth.
“I just wanted to try something new and I think the Nines is the perfect format to trial a club and see how I feel there,” Kelly said.
“I think there are a few girls who are trying a new club for the Nines.
“If you love it, you stay there and, so far, I am really enjoying my time at the Dragons.
“I don’t want to think too far ahead but at the moment it is going pretty well.”
Dragons’ Coach, Daniel Lacey, said the signing of Kelly was a coup for the Dragons and he hoped she would now stick with the Red V for this year’s NRLW campaign.
“Isabelle was on the top of our list to come to the club for the first NRLW season and I never gave up hope of her becoming a Dragon one day,” Lacey said.
“She’s only committed to the Nines for now, but hopefully we can sit down at some stage and look at her future with the Dragons.”