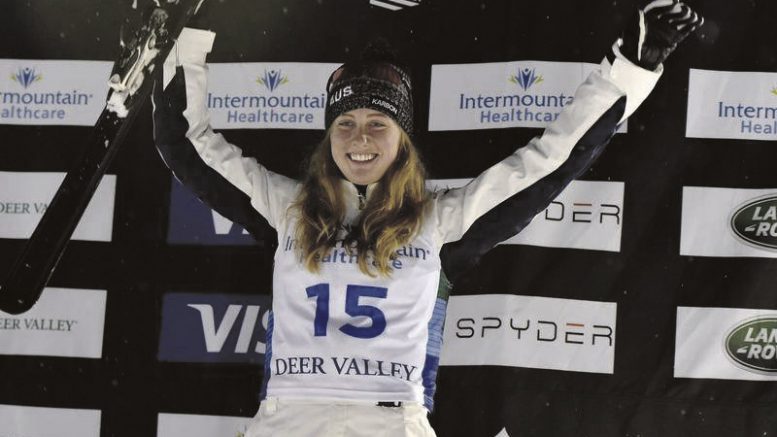 Willcox landed the jump, a lay-full double back somersault to score 81.76 out of a maximum 87 points, to take the lead in the tournament, before ultimately finishing third, behind 2019 World Champion, Aliaksandra Ramamouskaya, from Belarus, and America’s Megan Nick.
In January, Willcox qualified fifth for the final in Europe before snatching the bronze medal in the finals on Saturday, February 8.
She beat fellow Australian Laura Peel, who crashed out.
It was Willcox’s first medal in World Cup skiing.
“It feels absolutely unreal and to be doing it in Deer Valley with this crowd is amazing,” the 23-year-old said.
“We had a couple of tricky days training.
“It was snowing a lot and I knew I could jump during the snow and during the wind, because we’ve had a lot of practice for that in the past, so I just took it jump by jump.”
The bronze medal sees 23 year old Willcox now sitting sixth in FIS World Cup rankings.
Willcox grew up on the Central Coast competing in gymnastics and making regular trips to the snowy mountains for family holidays.
More recently, she trained with the Victorian Institute of Sport and she spend the majority of her year overseas in the Northern Hemisphere, for both training and competition.
Aerial skiing sees skiers take a long downhill run and launch themselves 15 metres or more into the air off a steep ramp at speeds of 50-70 kms per hour, to perform a range of twists and somersaults, before landing on a slope of around 70 degrees.
Willcox is hoping to make her Olympic debut at the 2022 Beijing Winter Olympic Games.