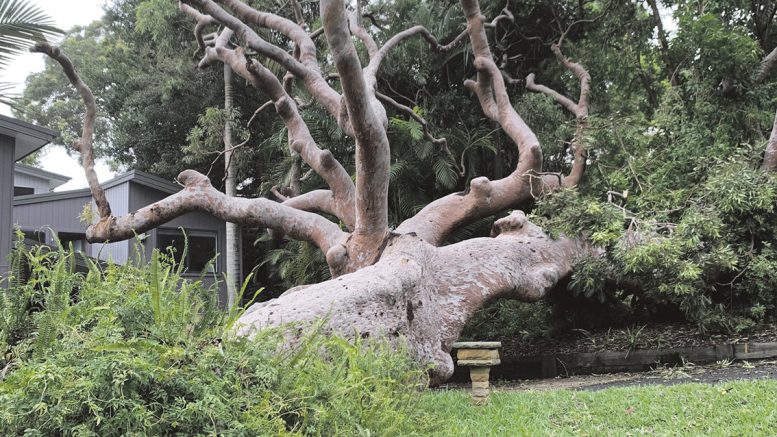 The Macmasters Beach community is in mourning over the loss of an iconic Sydney red gum, which came down during heavy winds and rain on February 10.

Located at 508 Scenic Dr, on the property of Kieran O’Connor and Sarah Craft, the tree fell without warning at around 10.30am, demolishing the home’s driveway.
Believed to be well over 200-300 years old, the majestic gum was listed on Central Coast Council’s Significant Tree Register and was considered to be one of the area’s favourite landmarks.
“We were absolutely gutted and shocked,” O’Connor said.
“For a tree of its size, you would have expected a loud noise as it came down, but it just toppled quite gracefully.
“The tree provided shade and privacy, it’s one of the reasons that we bought the house in December, 2018.
“The outlook now from the house is completely different.
“We wanted our two children to grow up enjoying it and we wanted future generations to cherish it.”
O’Connor said hundreds of people had called in this week to pay their respects to the fallen tree.
“The tree was iconic in the neighbourhood, everyone who drives down Scenic Rd looks for it.
“People would often stop and take photographs of it.”
O’Connor said the fallen tree had been reported to Council, but swift action needed to be taken by the couple’s insurance company, with the driveway completely blocked.
“It took down some power lines too, so there was a public safety issue,” he said.
A crane moved in on Tuesday morning to remove the huge limbs of the tree, with the trunk yet to be disposed of.
Macmasters Beach Progress Association President, Barbara Wills, said the loss of the tree was a great “shame for the community”.
“Its botanical name was Angophora Costata,” she said.
“It would be great if the community could take some of it home and make something useful; it would be such a shame to see it become wood chip.”
O’Connor said he would like to see as much of the tree preserved as possible.
“Although a lot of the limbs are going this week, we are keeping four or five of the larger ones so people can come and take a little bit of the tree,” he said.
“A lot of people have an interest in it and they are welcome to chop up the limbs and take some away.
“We are engaging with several people to see if the trunk of the tree can somehow be preserved for use in a park, or as a sculpture.”
O’Connor said the extent of damage to the home’s driveway would not become evident until the bulk of the tree was removed.
“The gardens around it were destroyed and obviously there is going to be a big hole in the driveway, but no cars were damaged and no one was injured,” he said.