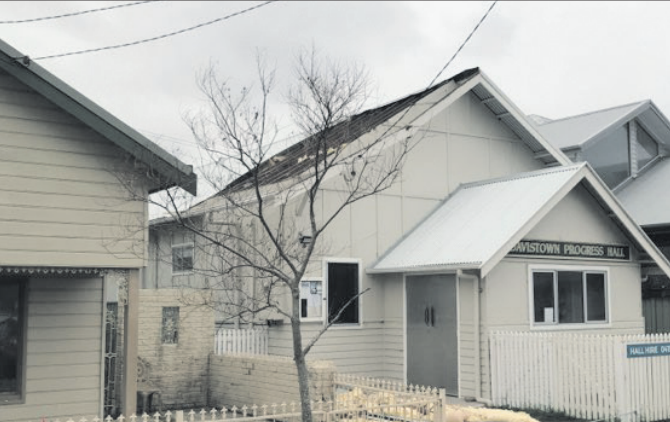 Just 12 months after it was installed, a large portion of the roof of Davistown Progress Hall blew off in strong winds on January 11.

Davistown Progress Association President, Jenny McCulla, said the loss was “heartbreaking”, with the committee having worked hard in recent years to make major improvements to the hall with the help of grants from the State Government and Central Coast Council.

“The winds were absolutely horrendous,” McCulla said.
“They were strong enough to knock over a heavy concrete pot.
“Certainly they were the strongest winds I have experienced in the five years that I have lived in the area.
“The winds caught the roof from the south-east corner and unfortunately took part of it off.
“Luckily though, no one was hurt, and the neighbours’ properties were not damaged.”
McCulla was alerted to the incident by a neighbour and she said the SES and Ausgrid acted quickly to secure the building, with a tarp erected the next day.
“We have already had the assessors in and are now awaiting building quotes,” she said.
“Being the holiday season, many builders have not yet returned to work, but the committee is working hard to have the issue resolved and the hall safe for users as soon as possible.”