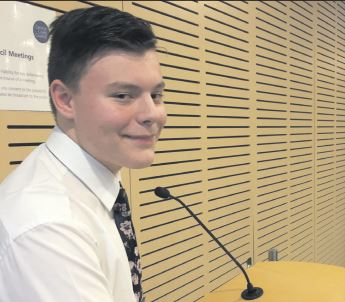 Jayden Delbridge speaking at the public forum on November 25

A 14 year old schoolboy has taken Central Coast Council to task for not live streaming an impassioned address he gave at the public forum prior to Council’s November 25 meeting.

The successful motion, which was formulated following approaches by Jayden to councillors, also saw Council acknowledge with “grave concern” the escalating trend around suicide in Australia. Supported by nine fellow students from St Peter’s Catholic College in the public gallery, Jayden told councillors that he was concerned at the “stigma around mental health”.

“Years ago, no one wanted to talk about domestic violence, it was frowned upon. “Now we have white ribbon day, marches and many other initiatives. ” He urged councillors to encourage dialogue and action around suicide prevention, recognise World Suicide Prevention Day, ask the CEO to provide a report on all suicide prevention initiatives on the Central Coast, and, give its condolences to all families affected by suicide in the region.

“The report will give Council a proper understanding on how many initiatives are being run on the Central Coast and how Council can help suicide prevention initiatives, ” he said. “Some of these programs include Headspace, which Council already helps through the Connected Community program, Suicide Prevention Australia and Beyond Blue. ”

Jayden referenced the students who had come to support him and was disappointed to learn that the speech would not be broadcast on Council’s live stream, with many of his school friends expecting to listen in from home. A Council spokesperson said suicide was a “difficult and complex issue to discuss in an open forum, particularly given the significant risks involved. “For these reasons, health professionals advocate the use of evidence based procedures for discussing suicide, ” the spokesman said.

“While Council recognises that Jayden Delbridge has a strong and personal desire to communicate about suicide and its prevention, and it supports his right to do so, Council has duties to others, particularly vulnerable persons. “In view of this and keeping in mind advice provided by health professionals to minimise the potential significant risks to others that the discussion of this topic may pose, Council decided not to live stream any discussion on the motion, including the public forum.

“This was to exercise a duty of care to minimise risks that a discussion in this forum may have for any vulnerable audience. ” But Jayden said the NSW school curriculum encouraged conversation around suicide and mental health in schools.

“The State and Federal governments spend money to get specialists in to talk about suicide and mental health in our schools, ” he said. “We celebrate R U OK? Day and National Anti-Bullying Day, and the government is making its best efforts to allow people to have a conversation about mental health and suicide, with World Suicide Prevention Day held at Parliament House in September.

“We need to stop trying to hide the issue and have a very open conversation about it. “It concerns me that I will have to wait years for people to talk about mental health and suicide. “By that time it will be too late. ” Jayden, who regularly attends Council meetings and is on the Central Coast Climate Action Planning Working Group, said he was in the process of starting a charity called Michael’s Foundation, which aims to help children who have lost family members to suicide and help reduce the number of suicides.

Jayden said that at the end of the day, he hoped the successful motion would create a conversation around suicide.

The council spokesperson said a minute’s silence was observed at the Council meeting to acknowledge those families and communities impacted by mental ill health and suicide.

“Council has resolved to respond with a further report about Council’s activities to support World Suicide Prevention Day in September 2020, and Jayden Delbridge will be invited to attend a further briefing with councillors about this important matter in early 2020, ” the spokesperson said. ”

If you have any concerns around mental health or issues raised, please call Lifeline on 131144.