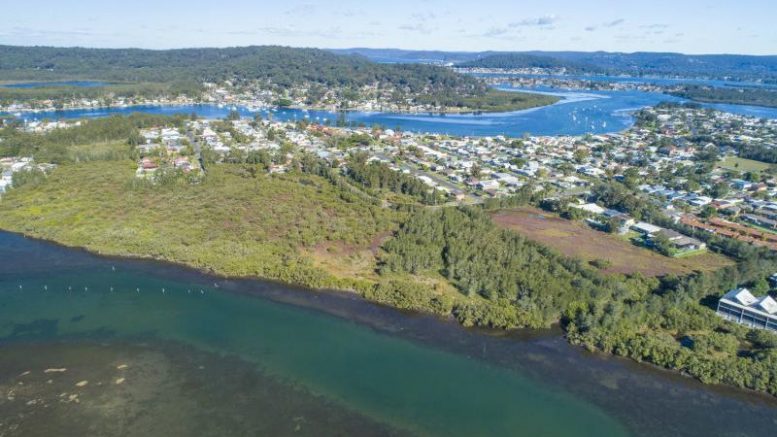 A broader view of the Tibal Shoals land in relation to other parts of Davistown Photo: One Agency

The future of sensitive wetlands at Davistown is uncertain, with Central Coast Council voting on November 25 to expedite buying the land and the real estate agent representing the owner saying a private offer has already been accepted.

A successful motion from Councillor Troy Marquart saw councillors vote to call on Council officers to obtain a new valuation on the land and make a new offer as soon as possible. This followed advice from officers that an offer had been made on the land six months ago with no response and that $1,436,049 is being held in the Davistown Wetlands Acquisition Fund.

Clr Marquart said residents had been waiting for action on the matter since 2003 and tabled a petition containing 1,209 signatures urging the acquisition. Following the meeting, Clr Marquart said the wetlands had been a focus of Council since 1984. “Contrary to misinformation … the current zoning of the Davistown wetlands does not suitably protect this important environmental asset, ” he said.

“The acquisition motion … will provide the protection that the wetlands needs. “It will also allow Council staff to deliver on assurances that have been made to local residents since 2002. “Council has been building a fund since 2002 for the sole purpose of purchasing the Davistown Wetlands. “Yet time and time again, successive Councils have allowed the fund to lay dormant and have risked it being pilfered by alternate interest groups.

“This decision by Council is a well overdue and welcome outcome for the Davistown community. “It is now up to Council to act in good faith and execute the will of the Davistown community. ” But Larry Altavilla of One Agency Platinum, who acts on behalf of the owner, said an offer had already been accepted from a private buyer, with the sale likely to proceed.

“The owner has not received any offers from Council, either verbally or in writing, and has had no conversation with Council for more than two years on the matter, ” he said. “He has gone to meetings to hear the concerns of the community and has always been open to conversations. “All he wants to do is sell his land for a reasonable market price”, Altavilla said.

Altavilla said he had left messages for relevant Council officers which had gone unanswered. A Council spokesman said Council had posted an offer, based on an independent valuer’s assessment of market value, for the acquisition of Davistown Wetlands on July 5, 2019. “The property owner’s lawyer responded with enquiries with regards to the offer on July 26, to which Council responded on September 18, clarifying the matters raised and reiterating the offer made, ” the spokesperson said.

“Council followed up with a further email to the lawyers on October 18, receiving a response on October 21, advising that they would follow up with their clients for instructions and respond to the offer. “Council is still waiting to receive a formal response to the offer. “Council has always dealt directly with the lawyers of the property owner and not through any real estate agent. ”