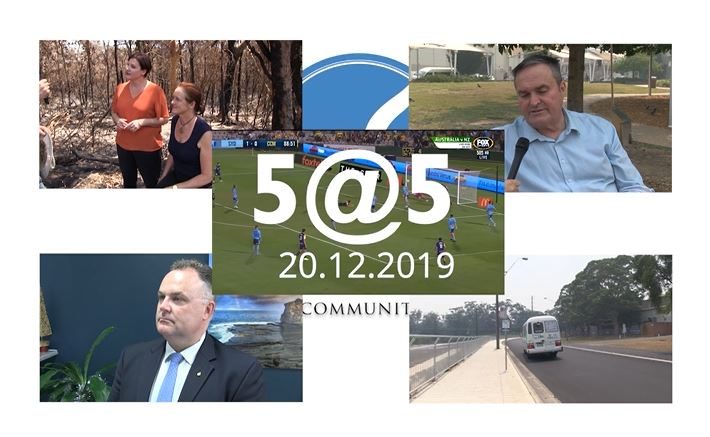 NSW premier Gladys Berejiklian yesterday called a state of emergency across NSW for the next 7 days in response to extreme weather conditions that threaten to exacerbate bushfires.

The fires were also in the sights of opposition leader, Jodie McKay, who travelled up to Mangrove Mountain earlier this week to assess conditions and speak with firies. McKay was critical of the government’s handling of the fires and insisted they call in the Army to support the RFS with transport and logistics.

Council votes down tighter water restrictions [need to shorten] Council rejected a rescission motion brought by Councillor Greg Best on Monday night that would have led to a new motion to move immediately to Level 2 water restrictions on the Central Coast. Councillor Best who expressed grave concerns about a major loss of water over the summer holiday period, sought to overturn councils’ previous resolution on the matter, but after a very fiery encounter, mayor Lisa Matthews shut down debate and forced the matter to a vote. All Labor councillors vote as a bloc and, together with independents Jane Smith and Louisa Greenaway, vote down the rescission motion. During the meeting, Council staff confirmed that the Coast is now pumping 13 million litres a day to the Hunter. Councillor Best stated he would approach the state government to take over management of the Central Coast Water. Councillor Chris Holstein said he was disappointed the debate was shut down before the situation could be illuminated for the public. We spoke with Councillor Holstein a little earlier.

Free CBD Bus Shuttle for Gosford Council this week launched its free “Park & Ride” Gosford CBD shuttle bus service on Monday, aimed at relieving parking congestion in the city centre. The shuttle service will ferry motorists from parking facilities at Adcock Park and in Racecourse Road to major points within the city centre. The service is free and will run weekdays from 6am to 8pm, running every 10 minutes at peak times and every 20 minutes at other times Our video crew took a ride on the shuttle earlier today and its seemed most of the Coast has not yet got the memo.

HSC results are in Gosford High School has again proved itself as an educational leader on the Coast, being the only school on the Coast to produce a first in course ranked student, with not one but two of its leavers achieving a first in course in the 2019 HSC. Olivia Russell, who is hoping to be accepted into the University of NSW, topped the state in French Beginners with a perfect score of 100 and Patrick Fang also scored 100 in topping the state in Mathematics. Fang is in fact a Year 11 student who elected to sit his final maths exam this year. He told us that having just one subject to study for this time around helped him to focus his study time.

In sport, the Central Coast Mariners suffered a narrow 1-0 loss to A-League leaders, Sydney last weekend. Mariners’ Coach, Alen Stajcic, made three changes going into the match, with Eunsun Kim captaining the side in place of Tommy Oar, and top scorer, Milan Ðurić, returning after two weeks on the bench. New signing Jair also made his full debut for the Yellow and Navy in place of Matt Simon. Ðurić had an opportunity to level from a free kick outside the area, but his dipping effort was smothered by Redmayne; denying the Serbian his fourth goal of the season. Despite a brave effort, the Mariners now find themselves at the bottom of the A-League ladder, a position they occupied at the end of last season and one they will be intent on improving upon when they face Adelaide on December 22 at Central Coast Stadium.

The blue and yellow colours of Beach Water Polo Fours brightened up Terrigal Haven for the first time ever last Sunday. Fourteen teams from all around NSW were vying to be the champions of their respective divisions on a beautiful December day. In the womens final, local team The Cacks, won in straight sets, while in the mens, Dad’s Army proved too strong. Local Jai McNamara who was in the losing final team, claimed he was distracted by a large Bull Ray swimming beneath him. Organiser, Scott Nicholson, said the event was well supported by Central Coast Council and the local water polo community, and they will be back next year.

Christmas Carols The sound of Christmas carols are alive and well across the region with both small and larger public events filling the air with good will. The weekend will see the Central Coast stadium play host and on Christmas eve the Gosford Uniting Church will fill Kibble park the merry tones. [pause] One of our readers picked up this delightful display of community spirit inside a local shopping centre this week.

That’s all for this week’s 5@5, all our scripts and archives are available at our website, and follow our Youtube channel for instant updates. Have a very merry Christmas and new year period, we’ll be taking a short break. See you next year in 2020.