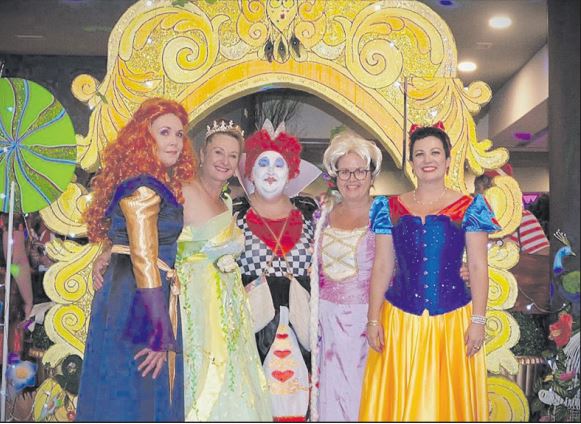 The night was held at Ettalong Diggers on October 26 with more than 400 hundred women, dressed in their fairy tale best for a Once Upon a Time fundraiser.

The money raised will go towards the Cancer Council’s local care programs and research into cancer that affects women.

Brisbane Waters Private Hospital breast and skin surgeon Dr Mary Ling was a guest on the night and paid tribute to the five women for their contribution to women’s health on the Peninsula and wider Central Coast.

“These evenings get women talking to women about screening and prevention and also raise money to help women when they need it most, ” she said. “In this fairy tale, there are no damsels in distress waiting to be rescued. “They are smart and capable women helping to create a better cancer destiny for their local community, ” Dr Ling said.

Two women were also honoured on the night – Ms Daphne McNab, who was diagnosed with breast cancer in 2009 and is now battling lung cancer at age 88, and Ms Kim Steed, who lost her battle with ovarian cancer last year. Ms McNab was honoured for her courage and for being an inspiration to other women newly-diagnosed. She has been a regular at Peninsula Girls Night in for the past four years.

“I wouldn’t miss it for the world, ” Ms McNab said. Ms Steed was honoured for her contributions to the NSW foster care system, having fostered 60 children over a period of 15 years. Her daughter, Ms Emma Lovie, attended the evening and spoke about her mother’s inspirational life and the devastation her family experienced after Ms Steed succumbed to ovarian cancer.

“Mum was 63 when she went to the doctor for a skin cancer check last year. “Her GP noticed stomach bloating and despite an initial de-bulking surgery and chemotherapy we lost her nine months later, ” Ms Lovie said.

“When mum was going through her battle, we heard a lot about clinical trials and this and that in Sydney, but there seemed to be a disconnect when it came to local people getting this access easily.

“The great thing about Peninsula Girls Night in is that all money raised stays on the Coast to go towards cancer research as well as financial and home help for local women with cancer. “It was so moving to see mum in the tribute on screen at the event, which sadly included too many young women and girls.

“Mum fostered more than 60 kids over a 15-year period and was also the most devoted grandmother. “She would have loved what this evening was about, ” Ms Lovie said.