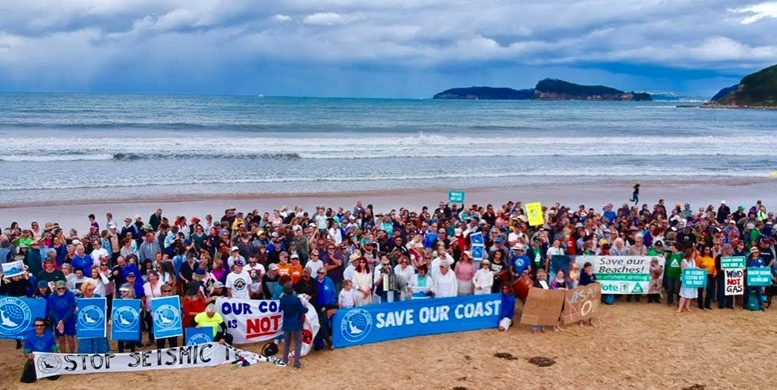 Save Our Coast's beach rally at Umina beach attracted 1800 locals in May 2019.

Community group Save Our Coast (Stop Seismic Testing), based in Newcastle, is “cautiously optimistic” that the Senate Inquiry into seismic testing will put an end to the practice off Central Coast waters.

The inquiry comes as 1,000 square kn of 3D seismic testing is being planned for Newcastle and the Central Coast under PEP11 (a petroleum exploration permit).

Save Our Coast founder, Natasha Deen, said the “devastating practice of intense and explosive underwater airguns blasts that fire every few seconds, 24 hours a day, for days, weeks, or months on end”, is “known to impact on the entire ecosystem”.

“We congratulate Senator Whish-Wilson on successfully pushing for this inquiry, and the thousands of community members who have helped create momentum for this movement to stop seismic testing, and have written letters, had conversations and stood beside us and our allies at numerous events,” Deen said.

“We look forward to continuing to present the myriad of literature and anecdotal evidence that shows the impact that seismic testing has on the entire ecosystem.

“The fact is that oil and gas companies have been able to conduct this inhumane and destructive method of searching for oil and gas without pause for thought for marine animals and the fragile marine ecosystem, and this inquiry is ling overdue.”

Central Coast Save Our Coast convenor, David Abrahams, said he was pleased the inquiry had begun.

“Hopefully, the inquiry will give the community a chance to express their concern for the effects of this destructive exploration,” he said.

Deen said academic research showed that seismic testing has been shown to kill plankton 1.2km away, cause malformations in scallops, deafen sea creatures, impact on penguin colonies for 100km, kill fish for thousands of kilometres, cause stress to dolphins and whales and inhibit whale song.

“Fishermen around the world report loss of catch following seismic testing testing … and called it and ‘assault’ to their livelihoods,” she said.

Save Our Coast has attracted 51,000 signatures on petitions to stop seismic testing, to be presented in parliament in November.