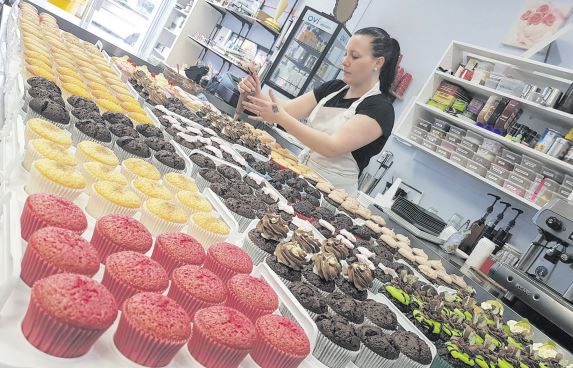 Gosford’s original Cake Boss, Kyla Daniels, has added another accolade to her recipe for success, having taken out the number one Wedding Cake Designer Award for the third year running at the Brides Choice Awards.

A self-taught baker, Daniels first rose to prominence when her enraptured social media following, obsessed with her cake-art creations, gave her the push she needed to open her first store in North Wyong.

After enjoying a period of success, Daniels opened her Gosford store on Watt St in 2017 and now works out of it fulltime, creating a range of unique goodies for her shopfront whilst also working on commissions for event cakes, including the wedding cakes she has become known for.

Now known throughout Gosford for her stunning creations, Daniels’ cupcakes have also taken the Coast’s capital by storm. In its first two days of operations the Gosford store sold out before a full day’s trade, with Daniels selling over 1200 cupcakes in less than eight hours.

She’s since sold more than 125,000 cupcakes as of this October with that number climbing everyday.

Daniels also likes to give back to the community and holds decorating classes for adults and kids whenever she can find the time. Indeed, she’s been so swamped with orders that she wasn’t even able to attend the Brides Choice Awards Ceremony.

On her win Daniels said she was humbled and wished to thank the brides that voted for her. “I am absolutely gobsmacked to have just been awarded the number one Wedding Cake Designer Award for the third year in a row. “Ironically, due to my workload with several wedding cakes needing creating, I couldn’t attend, but a huge thank you goes out to my helpers who flew the Cakes By Kyla flag and lifted the trophy on my behalf.

“And of course, to all my brides that not only chose me to make their cake, but voted for me, this is dedicated to you all. “What a feeling. “What a moment, ” Daniels said.