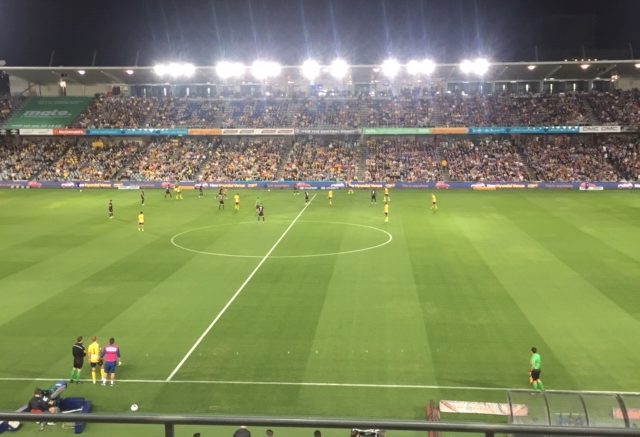 The Central Coast Mariners were on the receiving end of yet another video assisted referee (VAR) decision, though held on for a strong draw against the Newcastle Jets at Central Coast Stadium on Saturday night.

The Mariners got off the mark with their first point of the Hyundai A-League season, sharing the spoils 1-1 with #F3Derby rivals the Newcastle Jets.

The VAR decision annulled an incredible penalty save by Mariners keeper, Mark Birighitti giving the Jets another kick from the penalty spot, something they took advantage of.

Alen Stajcic named an unchanged starting team from the loss to Western Sydney last week and the hosts took an early lead through a familiar face when link up play between Jordan Murray and last week’s goalscorer Milan Djuric saw the latter become just the second Mariner to score in his first two games.

Murray latched onto a perfectly weighted Djuric through ball on the left before cutting inside onto his favoured right foot and repaying the favour with a floated cross that Duric volleyed first time past a helpless Moss and into the corner.

The second half began at a frantic pace with the hosts coming close twice in two minutes. , first through a Djuric free kick from the left that forced a big stop from Moss in the visitors net, and then a stunning run from Daniel DeSilva that ended with an effort cleared off the line by Millar.

Penalty one and two

Shortly after though the Jets were awarded a penalty for handball, but Mark Birighitti made an excellent diving to save to deny Dimi Petratos and keep the hosts ahead. The save was reviewed though and Birighitti adjudged to have moved off his line, and Petratos put his retake safely into the corner to pull his side level.

A wonder save by Birighitti denied Millar a goal on his return with twenty minutes to go when he stretched across the goal to stop Millar’s volleyed effort, and Djuric almost won the game for the Mariners in the dying seconds as a fizzing drive struck the base of Moss’ goal and cannoned back out away from goal.

The vocal 9000 strong crowd left the stadium with a mixture of frustration and hope for the future.

The Mariners now turn their attentions to Perth in a fortnight, but can rest up with the bye ahead in round three.

The next home game will be against FFA Cup finalists Adelaide United on Friday November 15 at 7.30pm.