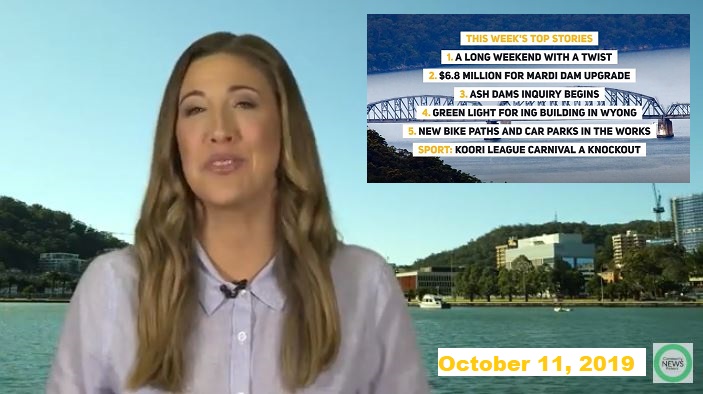 It was a long weekend with a Twist on the Coast this year with the staging of the inaugural LGBTIQA Coastal Twist Festival.

The three-day event was held at several venues across the Peninsula and attracted an estimated 6,000 people, with an equal mix of locals and tourists.

The Festival was organized by, among others, the Coast’s own Glitta Supernova and Juan Iocco from Central Coast Pride.

This project is part of the State’s “Safe and Secure Water” program and will involve the design and construction of new infrastructure at the Mardi Dam.

Central Coast Council Director for Water and Sewer, Jamie Loader, said the commitment from the NSW Government will enable much-needed upgrades of this facility.

The Plant produces up to 160 million litres per day – the equivalent of 64 Olympic swimming pools.

A Parliamentary Inquiry by the NSW Public Works Committee will examine the impact of toxic coal ash from power plants.

The Inquiry will cover the future costs of remediating ash dumps including Vales Point and Eraring, both on Lake Macquarie as well as economic opportunities associated with coal ash re-use, site remediation and repurposing of land.

Central Coast MLC, Abigail Boyd, is a member of the Public Works Committee and said The Greens are concerned the government is putting off closing power stations because it may trigger potentially billions of dollars in clean-up costs.

The Inquiry will accept public submissions until May 2020 and report its findings by July next year.

ING building gets the tick

The Central Coast Council this week gave the green light to the ING Building in Wyong.

The Application lodged by the Gibbens Group is for a 4-storey office building on the edge of the North Wyong Industrial Estate with external car parking for 300 vehicles and an estimated cost of $11 million.

The building will be occupied by ING’s call centre and eventually accommodate up to 600 people.

Councillor Kyle MacGregor brought the motion and David Abrahams spoke to him this week about the development.

A 44 year old man was found seriously injured at Budgewoi on Wednesday morning.

He was treated at the scene for stab wounds before being transported to John Hunter Hospital and remains in a stable condition.

A 46-year-old woman was arrested at the scene and taken to Wyong Police Station.

The region’s network of pathways will get a major boost under the Central Coast Bike Plan and Pedestrian Access and Mobility Plan.

The big news in sport this week of course was the Koori Knockout.

The carnival showcased some of the best Indigenous rugby league talent in Australia, including NRL stars Greg Inglis, Josh Addo-Carr, Cody Walker and Andrew Fifita, among many others.

In the women’s tournament, the Wellington Wedgetails edged out the Butucarbin Warriors in a nail-biting 6-4 win, while in the men’s final, the South Coast Black Cockatoos took out the 2019 Rugby League Koori Knockout with an emphatic 40-12 point win over the Griffith Three Ways.

In other sport news, the former Doyalson Dragons junior and Central Coast Dolphins player Luke Cain was this week awarded the Dally M Touch Football Player of the Year.

Now playing with the West tigers, Cain won the award with double the points of the nearest player.

Central Coast Mariners player Sam Silvera has been rewarded for his strong pre-season and FFA Cup form with an A-League contract that will see him with the club until May 2022.

The 18-year old, who was on a scholarship deal, caught the eye of fans during an impressive string of FFA Cup performances, including an impressive goal against Brisbane Roar in the Round of 16.

And finally, we stopped in at the Australian Reptile Park this week to check on some of the newer arrivals, creepy and cuddly alike.

Sophie Walshe covered both ends of spectrum speaking first Park keeper, Kane, about the arrival of hundreds of baby funnel web spiders, before a slightly more comfortable interview with Elsa, the new Koala joey and her keeper, Hayley.