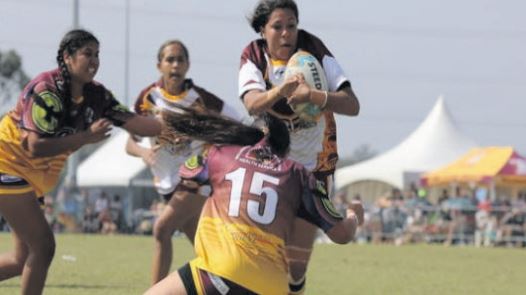 Action from the women in the Koori Knockout (Image: SBS/NITV)

About 40,000 spectators saw 164 teams compete in the Koori Knockout over the long weekend – the first major sports event at the new Regional Sports Complex at Tuggerah.

The event was hosted by Darkinjung Aboriginal Land Council and chairman, Matthew West, said he was proud to showcase the region to people from other Aboriginal communities all over NSW. Junior rugby league teams made up most of the Koori Knockout as well as 64 men’s and 20 women’s teams.

South Coast Black Cockatoos won the men’s competition with a 40- 12 point win over Griffith Three Ways. The Black Cockatoos set up their win early in the game, scoring 26 points in the first 20 minutes of the final. Griffith staged a bit of a revival in the second half, but the South Coast proved far too strong in the end.

Jason Gillard scored three tries for the Black Cockatoos. This was the first Knockout appearance for the South Coast Black Cockatoos, a memorial team put together by captain Ben Wellington and his sister Mel for their brother, James Wellington, who died just over a year ago.

James was much loved in the South Coast community and the Cockatoo jersey’s left sleeve bore a picture of James by tattoo artist Keith Penno, a young man for whom James had been a great positive influence. Last year’s winners, the Newcastle All Blacks were knocked out on day 3 in an upset 12-10 loss to the Dubbo Googars.

In the women’s tournament, the Wellington Wedgetails edged out the Butucarbin Warriors in a nail-biting 6-4 win. In the juniors, Kempsey took out the under-17s boys final, while South Taree prevailed 20-10 over the Toomelah Tigers in the under-15 boys final.

The La Perouse Panthers enjoyed great success winning both the under-16 girls final 34-0 over the Narwan Eels and the under-12s boys final 38-4 over the Butucarbin Warriors.

The men’s final on Monday capped off an amazing four days that showcased some of the best Indigenous rugby league talent in Australia, including NRL stars Greg Inglis, Josh Addo-Carr, Cody Walker, Andrew Fifita and Jesse Ramien, among many others. Fifita, who partnered with his brother David in Griffith’s front-row, said he was grateful to “give back to the people and the culture”.