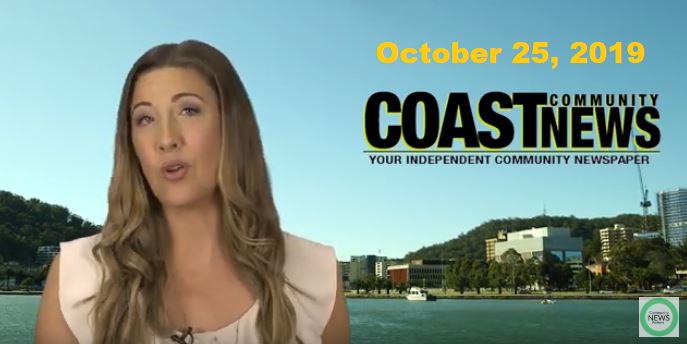 There were early signs today a long and hot summer is on the way with temperatures reaching 36 degrees across the Central Coast.

A hot air system moving across from Central Australia brought hot westerly winds and put the Coast’s Rural Fire Service on alert with a Very High fire danger rating. Another hot day is expected tomorrow, before temperatures drop to a maximum of 23 on Sunday.

The local community is mourning the tragic death of a local artist who died on Sunday after being trapped in a building fire at The Entrance. Popular local painter, Patrick Carroll, was located inside the Ebbtide Mall but could not be revived and died at the scene. It’s understood Carroll rang Triple-0 and was on the phone to emergency services during the ordeal. A police spokesman said there was fire outside his studio door, and he could not exit through the windows because of metal security screens. Police are investigating the cause of the blaze as well as the layout of the mall, built in the 1970s, and whether it had adequate fire escapes and sprinkler systems.

Uber Eats has come to the Central Coast. Gosford and Woy Woy locals will now have access to a wide range of restaurant-quality meals — delivered to their door with the Uber Eats app. The two cities, which have seen several new restaurants opening in recent times, will be the first in Australia to launch Uber Eats with both pickup and delivery options. We spoke with Khristina from Soul Foods in Woy Woy and put the app to the test. And it’s good to see our video crew continuing the fine tradition of covering stories that offer any possibility of free food.

Coast Community Connections held another successful “Bring Your Bills Day” yesterday at the Peninsula Community Centre, following the success of its inaugural event in April this year. The Community Organization partnered with the State Energy and Water Ombudsman’s Office as well as a long-list of retailers and support groups to help people sort out their bills, rates and benefit payments, including to help people access energy affordability schemes. In a first for the Central Coast, the Ombudsman’s office is looking to use the Woy Woy event as a basis to roll out the initiative to other parts of NSW.

News of a $75 million solar power project on Delta Electricity’s coal ash dam comes only two weeks after the announcement of a Parliamentary Inquiry into rehabilitation of the State’s ash dams. Delta will underwrite the 80-hectare development with a power purchasing agreement with Enernet Global who will finance and build the 60 gigawatt plant.

The solar farm will comprise 220,000 solar panels with power to be on-sold by Delta into the national electricity grid. The solar farm is expected to be completed by early 2021 and create over 100 jobs in the construction phase. We spoke by phone today with Delta spokesperson, Anthony Callen.

NSW Health has begun an investigation into the treatment of 21-month-old Hamlyn Terrace girl, Lorelei Bellchambers, after she was sent home from Wyong Hospital with a broken neck. Lorelei’s mother, Elise Bellchambers and her daughter presented to the hospital following a car accident on October 14, but were sent home after only the mother was checked for injuries. Two days later, the family returned to the hospital with Lorelei in distress. She was later flown to Westmead Children’s Hospital where doctors discovered Lorelei had fractured her C1 and C2 vertebrae.

In sport, the Central Coast Mariners registered their first points of the A-League season with a one-all draw in F3 Derby with the Newcastle Jets. The Mariners team took an early lead when Milan Djuric latched on to a floating cross from Jordan Murray to become just the second Mariner to score in his first two games.

But the VAR again proved to be the Mariners nemesis, after another hand-ball penalty against them and then an extraordinary intervention allowed the Jets a second penalties after an extraordinary save by Mark Birighitti. The Mariners have the bye this week before travelling to Perth for their Round 4 clash with Perth Glory.

It promises to be a big weekend, beginning with the launch of Chromefest in The Entrance today. The Central Coast Council’s annual ChromeFest event is expected to attract more than 50,000 locals and visitors for a three-day tribute to hot-rods and everything 1950s and 60s with a host of displays, classic car displays, car cruises, retro stalls, fashion, music and dancing.

On Sunday, the Avoca Beach markets will celebrate its 10th anniversary at Heazlett Park Foreshore. The Avoca Markets have become one of the premier gatherings of artists, food and crafts on the Coast and this weekend is likely to see a big turn-out.

And finally, on Thursday, ghouls and girls across the Coast will gear up for the biggest Halloween party ever on the Central Coast when The Entrance and District Chamber of Commerce hosts “Fright Night”. The Chamber has teamed up with purveyors of all things spooky, the Grey family, whose Haunted Houses have delighted adults and terrified children for many years.

Event organizer Belinda Katalinic said the Chamber approached planning of Fright Night around making Halloween safe and easy, not just for trick-or-treaters and their parents but for the wider community.

Don’t forget to slip, slop and slap this weekend and we’ll see you again for next week’s 5@5.