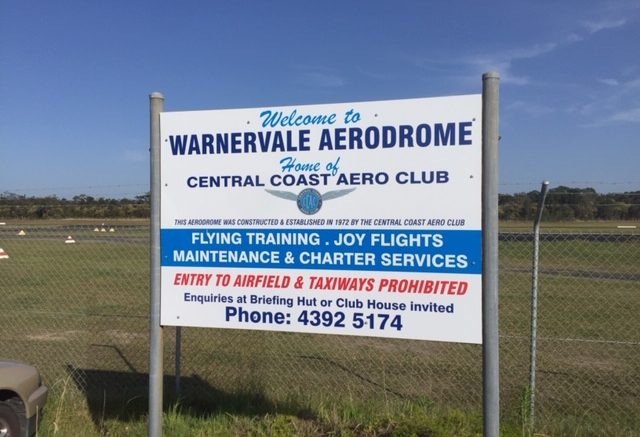 A State Government review of operations at Central Coast Airport, Warnervale, has been welcomed by the local aviation community as a “sensible” decision.

Central Coast Aero Club CEO, Andrew Smith, said “it had to happen, we couldn’t operate under the current regulations, it would have crucified our business. “We are happy that the State Government has seen the importance of aviation infrastructure on the Central Coast, ” Smith said.

The review will look at the airport’s operations under the Warnervale Airport (Restrictions) Act 1996 (WAR Act) and assess how the airport should be managed and regulated in future. It was announced by Liberal Central Coast MLC, Taylor Martin, and Terrigal MP, Adam Crouch, who said it was a win for the aero club which had been burdened by a statutory flight limit at the airport site for two years.

“The airport plays a significant role in training the next generation of Australian pilots, as well as enabling medical evacuations and bushfire emergency responses, ” Martin said. Crouch said he had been in constant contact with the Minister for Planning and Public Spaces, Rob Stokes, to ensure that the needs of the Central Coast Aero Club were aired at the highest levels within the NSW Government.

“I am delighted that during the review period, the Department of Planning, Industry and Environment proposes to not take compliance action against the airport operator on the statutory limit of daily take offs and landings, ” he said. “Minister Stokes has written to Central Coast Council asking that they partner with us in providing the best outcome for our region. ”

Following acceptance from Council to partner with the NSW Government, Council and the Department of Planning, Industry and Environment will meet to discuss the Terms of Reference and the appointment of a reviewer. From then, it is expected the review will take about three months.

The aero club and the aviation community have been campaigning for many months for a meeting with Council and the State Government to discuss their concerns about the airport’s future and review of the WAR Act, especially in the wake of Council notification that there “probably” had been a breach of the WAR Act.

In July, Council verbally notified the aero club that the WAR Act probably had been triggered and air traffic was likely to be restricted as a result. At that time, Wyong MP, David Harris, said the WAR Act had been triggered because of an “alleged unofficial extension of the runway”. Harris said the NSW Department of Planning and Environment revealed in a 2016 letter that vegetation clearing at the airport resulted in an extension and upgrade to the existing runway.

Even though the cap on air traffic has not been instigated, under the WAR Act, the number of take offs and landings could not exceed a daily total of 88, excluding emergency services aircraft. The WAR Act came about as a result of community opposition to a proposal in 1994 by the former Wyong Council for a 1,800m runway to be built and funded by a private developer.

Another proposal by Wyong Council for a 1,600m runway was rejected under the WAR Act. Aero Club CEO, Andrew Smith, said “we want to make it clear to the public that we are not in favour of adjusting the WAR Act to allow large jet transport. “We are against that, we only want to remain light aircraft and associated industries with the current boundaries, ” he said. The airport was built in the early 1970s on Council land and control of the airport was licensed to Central Coast Aero Club from the 1980s until March 2015 when Council resumed control and management.

The club owns 2.4ha of land, about onetenth of the whole site, which contains their club facilities, aircraft and hangars, while the runway and taxiways are on Council owned land. It conducts pilot training, commercial and scenic flights for tourism, charity days such as free flights for disadvantaged children and their families, school tours, try and fly days and theory instructions.

There are also many support industries such as avionics, aircraft frames and engines and overhauling and repairing aircraft. The aero club’s Airport Lease Agreement is due to re-negotiated by August 2021.