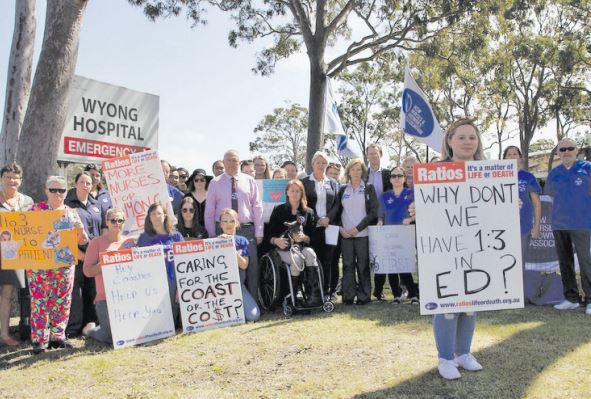 The rally at Wyong Hospital

Nursing staff in the emergency department at Wyong Hospital are overworked and understaffed while coping with a 12.5 percent increase in patients, who are then having a long wait to be attended to, sometimes more than four hours.

Wyong branch officials of the NSW Nurses and Midwives Association (NSWNMA) have launched a campaign calling on the NSW government to urgently boost their numbers on a 1:3 nurse-to-patient ratio.

Latest statistics from the Bureau of Health show that Wyong hospital was among the worst five in NSW for wait times in the emergency department, with 35.1 percent waiting more than four hours. The associations campaign to increase emergency department nursing staff is being backed by the four Central Coast Labor MPs, who attended the lunchtime rally on September 13.

Swansea MP, Yasmin Catley, took the fight to Parliament House on Tuesday last week when she presented a Private Members Statement. She said the health system was broken and Central Coast and Hunter region hospitals were under-resourced.

Prior to the election, the Premier promised an additional 5,000 nurses, 1,000 doctors and more than 2,000 other health professionals for NSW to ensure that patients get the best possible care. Where are they? We are not seeing them on the ground in our area and we need them.

Wyong MP, David Harris, says: If you dont work on ratios we wont see any real improvement because the 5,000 nurses promised by the government will be employed just to replace people that leave the system, he said. Everyone deserves the peace of mind that comes with knowing that if your or one of your loved ones is sick or injured, you can go to your local emergency department and be seen to as soon as possible.

Central Coast Local Health District Chief Executive, Dr Andrew Montague, said “figures in the Bureau of Health report reflected the fact that the longest flu season in NSW since the 2009 pandemic had influenced the amount of patient presentations to emergency departments.

“Wyong and Gosford hospitals experienced a significant increase in seriously ill and injured patients presenting to the emergency department and I would like to commend our staff for their hard work and commitment to providing timely, high-quality and safe patient care during this time”, Montague said.

NSWNMA Assistant General Secretary, Judith Kiejda, said: “Nurses in the emergency department at Wyong Hospital are being run off their feet and the hospitals own data shows that there’s been a 12 percent jump in presentations in the last quarter, compared to the same period last year.

“Our members are telling us they are exhausted. They are burning themselves out while they try desperately to maintain a high standard of care for the local community. This issue isn’t new. Members of the branch have been raising concerns directly with Central Coast Local Health District for months, yet the widespread staffing issues remain.

“Nursing staff are constantly working extra shifts or overtime to help meet demand. Skill mix continues to be an issue at Wyong, with unexpected leave being replaced by less experienced nurses, or not even replaced”.

A spokesperson for NSW Health Minister, Brad Hazzard, said that over the next term, the government would invest $2.8B to recruit 8,300 frontline health staff, including 5,000 additional nurses and midwives with 45 percent going to the regions.

Between mid-2012 and mid-2019 the Central Coast Local Health District increased its workforce by an additional 1,044 full time equivalent staff, including 453 more nurses and midwives. Presently it has 2,500 full-time nursing staff and based on current projections, it is anticipated at least 412 additional staff will be recruited over the next term, more than half nurses and midwives.

Recruitment is incrementally staged to ensure workload and responsibilities match training, and to prevent imbalances which can have economic implications on local budgets and affect patient care. To expect adjustments to happen spontaneously is naive, the government spokesperson said.

Determining future staff requirements typically builds upon many local variables including changing population growth, technological and social change, skills mix, and health policy. Mandated nurse ratios would abolish the staffing flexibility at the heart of the NSW health system, which allows nursing hours to be matched to the busiest times and to each patients needs.

The present methodology empowers nurse unit managers to determine their staffing numbers and adapt them as needed, to ensure the right numbers are in the right place at the right time. Safe and effective use of all members of the nursing team boosts staff retention rates and can free up more clinical time, contributing to improved patient outcomes and increased access to services.

There were 18,107 emergency attendances at Wyong Hospital, up by almost 2,000 patients compared to the same quarter last year, with the most significant increases in the more serious triage categories.

The budget for Central Coast Local Health District this financial year is $873M, an increase of $32M on the previous financial years annualised budget.