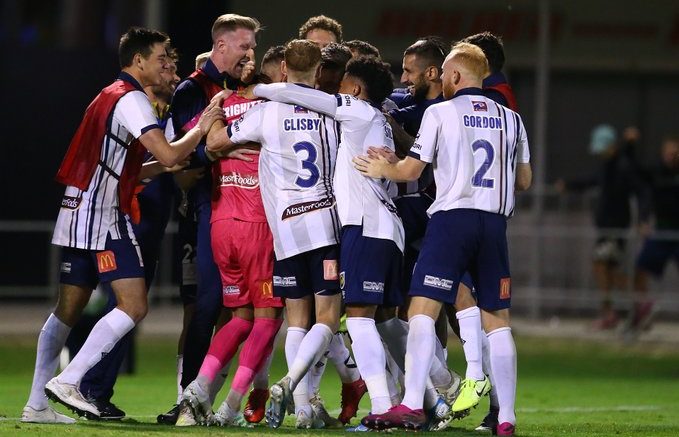 The Central Coast Mariners have progressed through to the final eight of the FFA Cup with a victory over Brisbane Roar on penalties.

Goals by Matt Simon and Sam Silvera were not enough to separate the sides after 120 minutes of football. Round 16 of the Cup saw competitive debuts for, Milan Duric, Eun-Sun Kim, Dylan Fox and Mark Birighitti, in the retro Coasties kits as the Mariners searched for progression to the FFA Cup quarter finals for the first time.

Despite being on the back foot early, the Mariners were awarded a penalty when Matt Simon was brought down in the box and the Skipper made no mistake from the penalty spot to give the visitors the lead in the 21st minute.

The Roar were fired up and missed a glorious chance as an unmarked Mauk put his shot over the bar and Birighitti was called into action for the first time late in the half as he stopped a tame Brad Inman shot. The Mariners stayed firm and took their lead into the break.

It took just 60 seconds into the second half for Brisbane to grab the equaliser, as Inmans shot curled in off the post. It took until the 72nd minute for the Mariners to have another chance as Tommy Oar caught the Roar defence napping and let fly a rifling shot that smashed into the frame of the goal.

Good linkup play between Oar and Jordan Murray saw the wingers cross met by Simon who laid the ball off to Sam Silvera, and the 18-year old snatched the lead back for the visitors with five minutes to play. But the advantage did not last long as Brisbane were awarded a penalty with ODonovan making no mistake from the spot.

From there the game went into extra-time and despite being under a lot of pressure in the first period, the Mariners created chances near the end as both Murray and Dylan Fox put their efforts narrowly wide. The second half followed the same pattern as the first, with the Mariners soaking up pressure, but chances slowed with tired legs across the park for both teams.

The Roar were edging closer and former Mariner, Aiden ONeill, saw his shot strike the upright from a corner, but the teams couldn’t be split after 120 minutes as the game headed to penalties.

The Mariners went first and Simon got things underway with the first and the visitors converted all four, while Birighitti was the hero, saving twice, from ODonovan and Aldred, to send the Mariners through to a quarter-final clash against Hume City.

Fronting the press pack post game, Mariners Head Coach, Alen Stajcic, laid the praise on the clubs new signings for their efforts. It was a tense match and could’ve gone either way for long periods of the game. I thought when we scored the second one, especially being so late, we could hang on for the last five minutes.

Both teams showed they have improved from last year, there is a lot of resilience and character in both teams and I think it has showed tonight that the competition will be a lot tighter than it was last year. Sammy (Silvera) changed the game for us in attack. He certainly showed that little bit of class, speed and mobility to beat players and it was good for him to get a goal.

He really is a weapon for us, and he has got so much more to give so I hope he has a good next couple of months to establish himself in our team. In terms of our defence we were quite good.

We were missing our three starting centre backs today, so to have a makeshift back four with Dylan Fox who has only been with us for a week, and Lewis Miller, who got his first start in senior football at this level, and Ziggy, who only played his second game for the club, as well as Birighitti, who hasn’t been here long, I’m so happy for those four, Stajcic said.

The Mariners will now face Hume City in the quarterfinals of the FFA Cup at Broadmeadows ABD Stadium in Victoria on September 17.