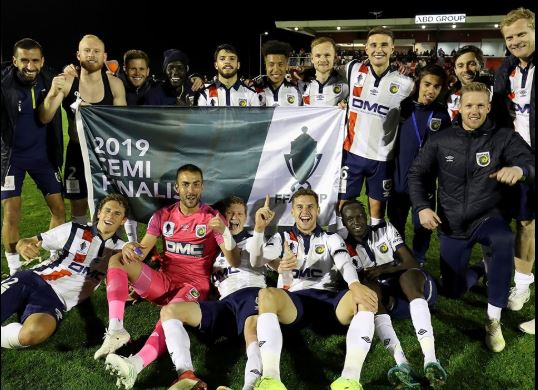 A last-minute winning goal earned the Central Coast Mariners progression into the semi-finals of the FFA Cup and means Alen Stajcic’s side is just one win away from the final.

In a battle for possession during the early stages of the game, both sides showed plenty of attacking football.

The home side had the best chance of a very open half as James Brown smashed his volley into the side netting, while the intensity began to rise midway through the half as a brave Hume outfit was starting to frustrate the yellow and navy.

The Mariners continued to look dangerous and a whipped delivery from Tommy Oar was headed wide by Kye Rowles, before Mark Birighitti parried away an effort from Steven Hewitt.

The second half saw the NPL outfit take the game to the Mariners with Marko Delic curling his shot just wide of the Mariners goal and it was an end to end affair with Sam Silvera hitting the crossbar from distance and Danny DeSilva unable to convert the rebound.

Hume were handed a chance with a free-kick on the edge of the area but it was fired wide by Daniel Dixon, and shortly after Tommy Oar raced forward but dragged his effort just past the outside of the post as time wound down.

As both teams started to throw players forward, Hume caught the Mariners out on the break, but Jack Clisby put in an inch perfect tackle that denied the home side a great opportunity.

The deadlock was finally broken though in the third minute of stoppage time as substitute Abraham Majok put the ball in after an almighty scramble in the box.

The match was played at ABD Stadium, Broadmeadows in front of a crowd of 1900 people.

Mariners are still on the rise despite their most recent loss