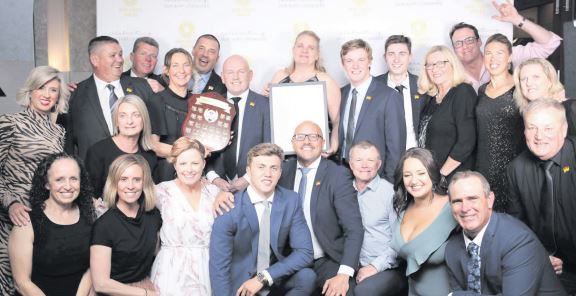 Some of the Umina Surf Lifesaving Club's members at the awards evening in Darling Harbour. Image: NSW SLSA

Umina also picked up two other awards on the night, with the clubs Patrol Team 12 being named the Patrol Team of the Year and Kai Darwin being named Youth Surf Life Saver of the Year. Surf Life Saving NSW president Mr George Shales presided over the evening. Umina Surf Life Saving Club places a strong emphasis on service to their community. They pride themselves on living their vision of creating opportunities for their members to develop as people and surf lifesavers.

Over the season they worked to meet the needs of all members in an inclusive and accessible way with a key focus on member welfare and protection.

Their Does the Cap Fit campaign has been a resounding success in celebrating the variety of opportunities available within the club. The campaign made great inroads, increasing engagement from sponsors, members and the wider community. From youth retention to accessibility, member skill development and lifesaving compliance, Umina has been leading the way in every facet of our movement.

The club achieved their 1000 member milestone for the first time ever last season, making it the largest club within the Central Coast branch. With lifesaving, leadership and governance at the forefront, their achievements across all areas of the organisation make Umina a worthy recipient of the Surf Life Saving NSW Club of the Year Award, Mr Shales said.

Mr Shales also praised Kai Darwin for his individual award. Kai is one of Uminas most skilled and dedicated young lifesavers. Not only has he logged almost 50 patrol hours over the season, at just 17 he has amassed a number of advanced awards including IRB crew and drivers, Silver Medallion Aquatic Rescue, Spinal Management and his training qualification.

He was also trained as a UAV pilot under the Westpac Lifesaver Rescue Drone program last season. Kai has been the first responder to a number of incidents throughout the season where he managed emergencies with a maturity and professionalism far beyond his years. Kai has shown great commitment representing the club off the beach too.

This year he initiated the Surf Safety education program at local primary schools. He provides water safety for weekly training courses and recently took on a facilitators role at the Central Coast Youth Camp and was selected to attend the 15- 18 years Leadership Program and youll also see his happy face at surf sports events where he has been involved for over five years assisting with water safety and emergency management for the team. He has put his hand up to be involved in almost every area of the organisation. The true value of his contribution is immeasurable.

With people like Kai already showing such initiative, I think youd agree our organisation has a bright future ahead, Mr Shales said. Club president Mr Stephen Scahill, said he was incredibly proud to see his club and individual members recognised for all its hard work over the past year.

Weve always strived to encompass everything that the lifesaving movement represents and tonight (August 31) we are so elated that our 1042 members have been recognised for our achievements and awarded NSW Club of the Year. The awards ceremony was held in Darling Harbour on August 31, with over 500 members of the NSW surf lifesaving community attending the 111th seasons presentation.

This article appeared first in the Peninsula News print edition. Pick up a copy at your local distribution spot.

Success in pool at Adelaide